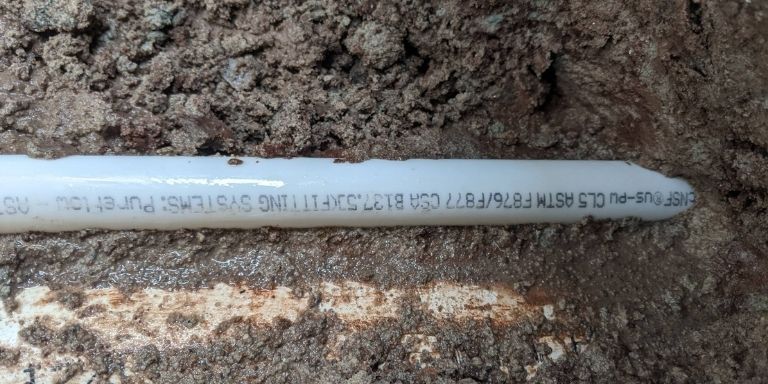 Modern plumbing has advanced much more than before. Thanks to that we’ve got products like PEX pipes which can alternate PVC, CPVC. But there’s always a dilemma when we talk about underground plumbing lines.

This leads us to the question: can you bury PEX?

That was the sneak peek of today’s topic. To learn which PEX to use for underground read our post till the end.

Can PEX Be Buried?

Yes, PEX pipes can be buried. They are now a popular alternative to PVC, CPVC, or metal pipes. PEX pipes are also known as cross-linked-polyethylene and are mainly used for plumbing purposes.

Many plumbing lines go through underground. PEX is now a popular option for such projects.

PEX pipes are used for various purposes. This is similar to how different types of PVC vary. But not all PEX pipes can be buried below ground.

Some PEX pipes will have a shorter lifespan if buried underground. They can’t withstand the pressure and the environment from underground.

This is why some specific PEX pipes are used for such cases.

What Type Of PEX Can Be Used Underground?

Previously we said that some specific PEX pipes are suitable for the underground. Let’s get to know them-

PEX-A is the lightest and most adaptable PEX piping among other choices. It’s manufactured using peroxide.

PEX-A is the softest and malleable tubing with the strongest chemical bond. It’s the second-best option for underground plumbing after PEX-B. They are a little bit more expensive than PEX-B tubings.

PEX-A is suitable for underground plumbing works due to its flexibility. These pipes are flexible enough to expand as necessary for water supply lines.

They also have a high tolerance to extreme temperatures. Even when exposed to the freezing temperature, these tubings can withstand it.

PEX-A tubings are non-corrosive, unlike copper or steel. It’s safe from leaking or contamination issues and easier to work with.

But chemicals from the manufacturing process might leech in the water from these pipes. It’s better to be aware beforehand to get safe drinking water from plumbing processes.

PEX-B is the best choice for underground plumbing among other PEX pipes. It’s super cheap as well. It has all the advantages of PEX-A and some advancements included. But it also has a few drawbacks.

PEX-B has an even higher bursting pressure than PEX-A. This means it can withstand even harsher temperatures than what PEX-A can withstand. This means it’s the perfect option for underground plumbing. PEX-B is manufactured using a moisture-cure policy.

When it comes to flexibility, PEX-B is less flexible than PEX-A. That’s why rendering it is a bit difficult. Also, its ratio to lower cross-link is less than PEX-A.

These are some of the disadvantages of the PEX-B tubing. But they don’t affect its capacity to withstand the underground environment.

PEX-C should be the last option to look at if they’re to be buried. Because it’s stiff, unlike other PEX tubings. It means it’s not flexible enough and cracks when exposed to extreme temperatures.

Consider other flexible plastic piping than using PEX-C. Because it has lower bursting pressure than the other two mentioned tubes.

The main reason why people use PEX-C as buried lines is because it’s cheaper. PEX-C is cheaper than PEX-A and PEX-B.

But it needs frequent repair if it’s buried underground. Naturally, the constant repairings can exceed the amount you wanted to save initially.

Here are all the PEX suggestions you need-

How to Bury PEX Underground?

Burying PEX for underground plumbing connections isn’t that hard. It’s quite similar to the black gas pipe burying process. All you’re gonna need are the proper plumbing tools for the installation process.

Clear out the ground area where you’re going to lay the pipe. The soil around the pipe should be rock, lump, or debris-free. Otherwise, the PEX pipe might be damaged. Once you clear out the area, lay the PEX pipe in the trench.

Step-2: Apply Insulation To The PEX

Although PEX pipes are not affected by the soil, it still needs some protection. The pipe’s connection area where it enters a water line system should be protected. You can use PE tape, HDPE wrapping, or closed-cell pipe insulation for protection.

You can use the insulation for the whole pipe as well. It’ll give the PEX more protection from the soil.

Most of the PEX pipes are connected with copper to brass fittings. The water supply line should be off before you give connections to the PEX. Make sure the connections are made properly.

After you join the PEX edges check the connections to see if there’s any leakage issue. If there’s a leakage problem, solder the metal joints again and check the PEX connections.

Hopefully, we’ve been able to assist you with your PEX plumbing project.

Question: At what temperature does PEX melt?

Question: Is PEX as good as copper?

Answer: PEX tubings don’t degrade easily as copper does. Pipes with higher PSI ratings burst in freezing temperatures while PEX can withstand it. They can handle extreme temperatures better than copper does. Also, it’s cheaper and easier to install.

Answer: Yes, it’s completely safe. The PEX pipe’s inner parts are made from cross-linked polyethylene. Sometimes the Newly installed PEX has a chemical smell and odor. Apart from that, there are no health issues involved in PEX. That’s why it’s safe for drinking water.

That was all from us about the question, can you bury PEX? Hopefully, this discussion was helpful to you. We hope your plumbing projects run smoothly for you.