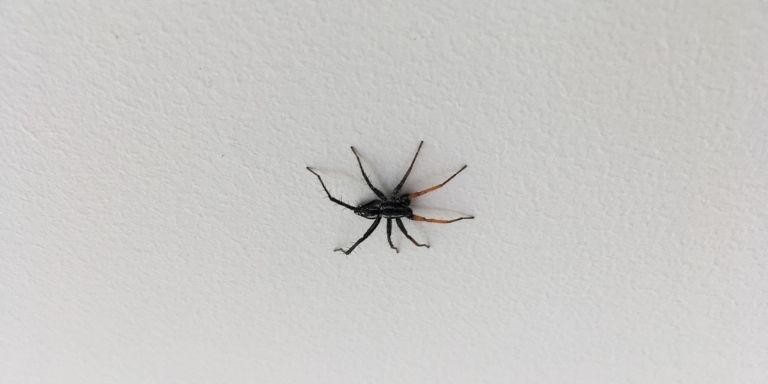 If you’re an arachnophobic person, watching a spider on your ceiling can be traumatizing. What if you’re not afraid of spiders? Still, a spider sitting on your wonderful ceiling can bother you. You can just kill it instead of being creeped out by it.

How to kill a spider on the ceiling?

This was just a summary of what we have prepared for you. Read our article if you want to get rid of that spider on your ceiling.

The Reasons You Should Consider Not to Kill A Spider

Before killing a spider, we would like you to consider some factors first. These factors might change your mind. You can even take some preventive measures to stop spiders from getting inside your house.

Not all spider species are venomous. There are only 25 out of 50,000 spider species that can cause harm to humans. If you see a spider on your ceiling, don’t panic. There is more than a 99% chance that it has no intention to harm you. You can show some mercy on the innocent species by sparing its life. And release it harmlessly on the outside.

Another factor that you should consider. That is, mosquitos and other annoying insects consist of a considerable portion of a spider’s diet. Spiders play an essential role in keeping those insect populations down and keeping your house free of them.

The Reasons You Should Kill A Spider

Now let’s see some of the factors why you should kill a spider.

Though most spiders are harmless, some deadly spider species (such as Black Widow, Brown Recluse) can potentially kill you. If you live in a venomous spider species-prone region, be very careful dealing with them. You can also release a deadly spider safely without killing it. In that case, you have to be very meticulous.

Sometimes spiders feed upon infectious insects. By this, they can spread diseases to humans and pets. This can be another reason to kill a spider.

Above all, you may have arachnophobia or feel disgusted by a spider. Then you have no choice but to kill it.

7 Ways You Can Kill/Remove A Spider From The Ceiling

Hopefully, you are out of the dilemma of whether or not you should kill a spider. Now let’s look into some methods of killing or removing a spider from your ceiling. It’s a bit similar to getting rid of worms.

Remember, you have to reach your ceiling to apply these methods. Your ceiling might be high up, and you might face difficulty reaching it. You can stand on a chair or household ladder in that scenario. Now let’s talk about the 7 methods of killing or removing a spider on your ceiling.

Using A Cup And Paper

You can easily catch a spider from your ceiling with the help of a cup and paper. Then release it outside without killing it.

First, you have to place the cup over the spider. Then slowly move a piece of paper under it. Now turn the cup upside down with the paper on top of it. The spider would get stuck inside it.

After capturing the spider, you can release it outside or wherever you want. Be careful not to squish it with the edge of the cup. That’s why we recommend you take a bigger cup.

Sprinkling Water over The Spider

For this method, first, spray the spider with some water. The water will make the spider slower. Then you can easily pick it up with a cloth or cup.

Later you’ll be able to release it wherever you want or kill it. Unfortunately, this will not work on spiders that can walk on water.

Spraying Vinegar/Lemon Juice on The Spider

Spiders hate citrus fruits and acidic juices. You can squeeze half a lemon and mix it up with water. That works as an excellent spider repellent.

Spraying this juice on the spider will make it flee from the ceiling. It will go away through the window. Or, it’ll sit on your wall from where you can easily pick it up and release it later.

If you don’t want to get closer to a spider, this method is for you. You can simply suck the spider with your vacuum cleaner from a safe distance. The spider will get stuck inside the filter of the vacuum cleaner. You can release it from there afterward.

This method works well with fast-moving spiders as well. It doesn’t leave any stain on the ceiling either. Be careful because the spider might occasionally die getting stuck inside the vacuum cleaner filter.

In this method, you need to reach your ceiling by standing on a chair or ladder. Then you have to squish the spider with a bare hand or with a tissue. If you’re not sure whether the spider is venomous, use other objects instead of your hands. You can use fly swatter, book, etc.

Keep in mind that this will leave a stain on the ceiling. To avoid this scenario, you can go with alternate methods.

Spraying Hairspray/Lysol on The Spider

Hair spray and Lysol are deadly to spiders. Spraying these on a spider will kill it within half an hour.

It is another convenient way of killing a spider without getting close to it.

Though killing spiders with bug spray is a common practice, we recommend you avoid this. Bug sprays have harmful effects on humans, pets, and bees, especially when overused.

If you still want to use this method, make sure to take proper precautions. Wear a mask while spraying the bug spray. After that, wash your hands properly with soap.

Here are some of our recommended bug sprays for you:

Remember to throw the dead spider in the trash can, especially if you have a lot of pets. Thus your pets or baby won’t come in contact with that. There you have it, these are the ways you can kill a spider on the ceiling.

Question: How can I get rid of spiders from my house permanently?

Answer: Prepare a mixture of water and vinegar with a 1:1 ratio. Spray the mixture around your house to get rid of spiders permanently.

Answer: No, spiders can’t remember people. Most spiders have poor eyesight, and their brains are not capable of remembering someone either.

Answer: Other than the common uses, bleach can be used as a pesticide or fungicide. So you can kill a spider with bleach.

That’s it for today. Now you know how to kill a spider on the ceiling. Choose any method which you feel is most suited for you.

Hopefully, you won’t have to worry about killing or removing a spider from your ceiling anymore.

Until next time, wish you all the best!