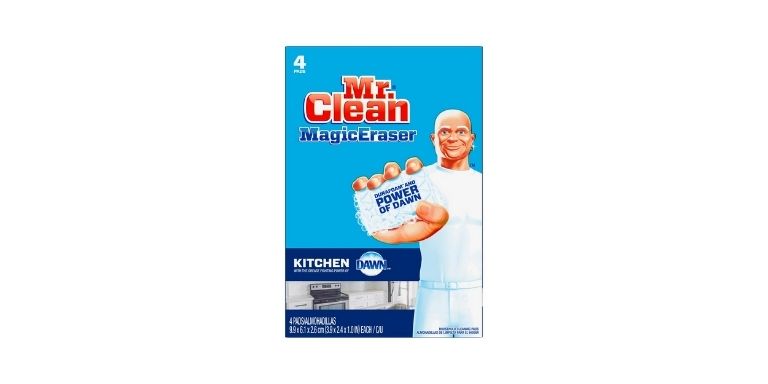 Water stained ceiling is a form of a nightmare. It leaves an unwanted and unpleasant scenario that might also cause mould problems in future. If not taken proper care of, things might not be reversible. Nobody would want that for their ceiling.

Will Magic Eraser remove water stains off the ceiling?

Most individuals use Magic Eraser to remove water stains from their ceilings. It has been shown to be a reliable method for removing water blots. It has astounded people with how well it eliminates difficult stains and debris.

Well, if you still have lingering questions, then hop right in! We will walk you through everything you know about it.

Let’s jump into the details!

Causes Of Water Stain On The Ceiling

Most of the roof issues start due to moisture problems. Whether it’s a bedroom or upstairs bathroom, usually stain equal water.

You may have a leaky pipe if you can’t find a likely water source above the ceiling stain. You may hear water running in pipes but no leaks, before your ceiling gets affected.

Water seepage is frequently caused by old caulking. It’s also possible that leaking piping or a broken shower pan is to blame. Bad plumbing can indicate a leak or that your pipe is sweating due to insufficient insulation.

You may also need to determine whether your pipes are old and in need of replacement, or whether other factors, such as hard water, are causing premature pipe damage.

If you have water stains on your roof, you’ll need to figure out what’s causing the problem. Other than a leak, there could be other reasons for water seepage from your roof.

If the stain appears after a period of snowfall or sandstorm you may see water damage. For example, it could suggest sand in water pipes, which would necessitate improving your insulation rather than your roofing.

Ways To Get Rid Of Water Stains On The Ceiling

Stains on the ceiling may be the hardest to clean off. They require too much physical labor and time. But, we’ll take it over a moldy roof.  The way to cast off water stains from ceilings in five steps:

Fix The Leak That Induced The Stain First

After primary identification, necessary steps should be taken to fix the issue. If it’s caused by a leak, then you need to find the source of it. And then, take the necessary steps. If you have to block the water pipe or replace it, then do it immediately.

Clean The Ceiling Stain With A Bleach Solution

Bleach is actually a whitening agent. Given that, be careful before using it on a colored wall. Because you may have to re-paint later on.

This is the secret to holding the stain from bleeding via new paint. But let me tell you, if the leak is deep, it may not work. So, identify exactly how deep the damage is.

These are some of our favorite brands for the oil-based undercoat:

Repaint The Ceiling, Now No Longer Simply The Stain

It is a better idea if the water damage is minimal. In that case, you can dry out wet walls easily.

Use A Magic Eraser

The solution works like bleach but is effective on every surface. This will remove molds and stains without leaving any residue.

Our personal suggestion would be to use a Magic Eraser. Let us walk you through the reasons and usage of it.

Why Use A Magic Eraser?

The simple reason would be its effectiveness. They are known for their super cleaning ability hence making them the best of the best.

Magic Eraser makes these melamine sponges which are very versatile and safe cleaning material. It doesn’t matter how tough the stain is, Magic Eraser is able to get rid of any kind of marks even if it’s a permanent ink.

The Melamine resin rebuilds into a foam with a microstructure which turns into something hard as. But, they still maintain the appearance and texture of regular foam.

As a Mr. Clean sponge is produced with open-cell foam, they clean with very mild coarse and gross smut and filth.

Magic Eraser For Water Stains On Ceilings: 4 Steps To Follow

Mr. Clean first debuted their famous go-to cleaning product, Magic Eraser, in 2003. And since then, it has become a household favorite for removing stains.

Mr. Clean’s Magic Eraser is a fantastic cleaning tool. Ceiling water stains can be removed without the use of bleach or other cleaning chemicals. Even without damaging the ceiling paint, the Magic Eraser can remove difficult dark stains. If you’re using a Magic Eraser to remove water stains from your ceiling, follow the instructions below:

Magic Eraser has got a few cleaning agents to help it out. These are the ingredients that make it such a powerful cleaning tool. Let’s learn about them:

Melamine: It gives the eraser a sandpaper-like tiny roughness. Which allows it to penetrate deeply and clear difficult blots. Water bubbles on paint on the wall can be diminished with this.

Formaldehyde: When mixed with Melamine, Formaldehyde generates a stiff resin. Which provides excellent cleaning results. Helps to get rid of the dirty brown stain of water.

Sodium: Antimicrobial activities of sodium bisulfite are well-known. They cleanse and de-germ the ceiling after proper use. Kills harmful bacterias on molds and wall-fungus.

Water: Well, the Magic Eraser can be used dry But, Its water-activated tiny scrubbers deliver a more thorough clean. As a result, experts recommend soaking it first and then utilizing it. Even recommended on water-damaged ceilings. It may moisten it up first, then clean it up.

Question: How long does it take for stains to appear on the ceiling?

Answer: 2-3 days maximum is taken for a stain to appear on the ceiling.it occurs after moisture creates a comfortable space for bacteria to grow.

Answer: Yes, they could be abrasive. So it’s better to avoid using them on marble and granite countertops.

Question: Does water stain on the ceiling mean mold?

Answer: Mould needs a damp and dark space to inhabit. Water stains provide both damp and dark environments which further proves they are actually molding infestations.

That was everything regarding Magic Eraser for removing water stains on the ceiling. We hope this issue is clear as a day for you.

If not, that’s ok too. Contract with a professional for further queries. Do not hesitate to reach out to experts if you feel confused. It is for your own safety.

Until then, have magical erasing!