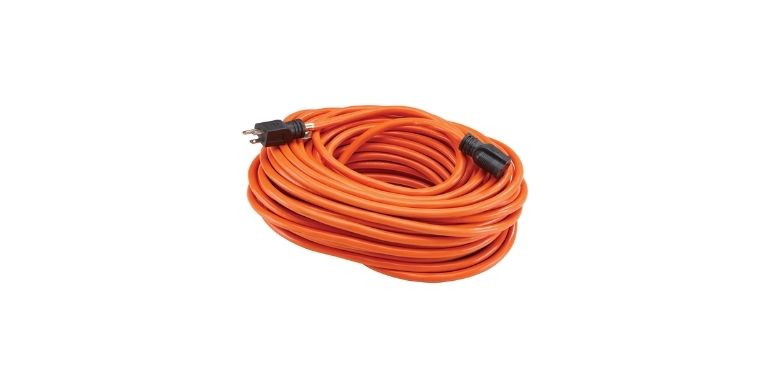 We are often in need of long extension cords for outlets. Especially in the outdoors. The first idea we get is to make a longer extension cable by plugging one extension cord into another. But most of us don’t know if it is okay to do so.

No, I don’t suggest that. An extension cord shouldn’t be plugged into another extension cord. It’s dangerous to do so. While you can power the device, for the time being, it’ll cause plenty of issues in the long run. The quantity of electricity you give to the device may also be lowered.

I’ll go through the risk in further depth below so you can see why you shouldn’t do it.

Can You Plug An Extension Cord Into Another?

Although technically it’s possible, I don’t recommend it since it poses a fire threat. It also violates OSHA and NEC guidelines.

When you start adding extension cables, you risk making the run too lengthy. This under-powers your gadgets, which is dangerous.

The connections where you hook your extension cables into one another are failure sites. Those are unnecessary. Do yourself a favor and utilize just one permanent extension cable for your purposes.

These are the best long extension cords in the market:

What Happens if You Plug One Extension Cord into Another?

The problem develops when the cables get slack and pull apart, resulting in power loss. Because in this design, the load has less current available.

A defect occurring distance from the source may cause the breaker to fail to trigger. Outdoor extension cord connections can get wet if it rains. It can electrify a whole area.

You should never rely on extension cables as a long-term safety measure. If you don’t have enough outlets, have an electrician install extra.

Professionally fitted electrical outlets are created in accordance with standards. They have been developed over many years, ensuring their strength and safety.

If you must use an extension cord, make sure the conductors have a larger cross-sectional area. The longer it is, the more a fuse protects it from excessive current flow.

The extension cord is made in such a way that it has little resistance. When the resistance is tolerable, passing the current becomes second nature.

At the end of the line, the current will be at a safe level. You can simply power your device in that scenario.

You’ll notice that the resistance of the extension cord increases substantially. As a result, the current is lowered significantly. It’s possible that you won’t be able to get enough current to power the device. If this occurs, it will be at the opposite end of the connection.

In that situation, the device may be harmed as well.

As a result, the risk when connecting one extension cable to another is that the device will be destroyed.

If both extension cables aren’t properly blocked, the cord may come close. You may believe that you’ll plug it in once more. The cable, on the other hand, is quite dangerous if it comes loose.

It’s possible that if the cord comes loose, sparks will fly. If combustible objects are present near the cord, a fire hazard may arise.

It’s difficult to keep an electric fire under control. This is more likely to happen outdoors. It can also result in large-scale losses. An electric fire can also spread quickly.

It is dangerous not only to the gadgets on the premises but also to the people in the surrounding region.

The gadget will lose power if the cable becomes loose. If you’re using it to power a life-saving gadget like a CPAP machine, you can’t afford to lose electricity.

Similarly, utilizing an extension cable to power a computer or other similar electronics. That it is used on a regular basis is not a good idea.

The lack of electricity might harm the device that you’re using the extension cable for.

Furthermore, such frequent failure of the device might result in harm. In such instances, you’ll either have to replace the device or spend money on repairs.

The Danger of Insulation

When it comes to utilizing an extension cable, insulation is really important. It’ll be difficult for you to utilize it if the insulation is inadequate.

When you link two extension cords together, the distance covered by both of them will be greater. The current flowing through the extension cables will be significantly higher than usual.

This implies that the insulation risk is also elevated.

Make sure you purchase one with stronger insulation. The increased current in the multiple extension cables puts the insulation in danger.

Starting with a larger one or going with a more permanent solution is better and preferred.

The amount of current in the extension cord rises if one extension cable is connected to another. Furthermore, if the plugging mechanism isn’t working properly, sparking might occur.

In the event of overheating, the plugs or the device may be harmed. There is a risk of fire in such circumstances as well.

Furthermore, if sparking occurs near the device, the device may be damaged. Gadgets nowadays may cost hundreds of dollars.

Do’s and Don’ts of Extension Cords

Extension cords are used to power gadgets with wires that can’t reach neighboring electrical outlets. The next time you go to the hardware shop to get extension cables, remember these dos and don’ts.

Do’s: Pick the Correct Extension Cord for Your Needs

There are three types of extension cords; occasional use, frequent usage, and tough use. Check the box or the cord itself for these identification letters to ensure the proper extension cords for your needs-

Two or three prongs are available on standard extension cables. The first prong is designated as “hot,” the second as “neutral,” and the third as a ground wire path. By providing a safe area for power surges to disperse, this third prong dramatically decreases the risk of shock and electrical fires.

Three-prong extension cables can only be used with three-prong outlets. If your home’s electrical wiring is old, you may need to upgrade it before replacing your outlets.

Every cord has a maximum amperage rating, which indicates the greatest amount of power it may safely transport. Examine the gadget you intend to connect and select an extension cable with a greater amp rating.

If you want to connect many devices, tally up all the amps needed.

If the card you’re thinking about doesn’t have an amp rating, you can figure out how much current it can handle. This can be done by looking at the wire gauge. The wire’s capacity increases as the gauge decreases. You can follow the following guidelines-

Surge protectors (or extension cables with built-in surge protection) are essential for protecting sensitive equipment from even mild surges.

Question: Is it possible to plug two extension cables into one outlet?

Answer: Yes, you certainly can. This is also valid for surge protectors and power strips. You do, however, risk overloading the outlet.

Answer: No, it isn’t. In a professional context, it violates half a dozen OSHA laws. It may also cause a fire.

Question: Which is better; a surge protector or an extension cord?

Answer: Surge protectors are safer than extension cords when it comes to connecting gadgets into power strips.

I suggest contacting a professional if you still have questions.

Till next time, good luck!