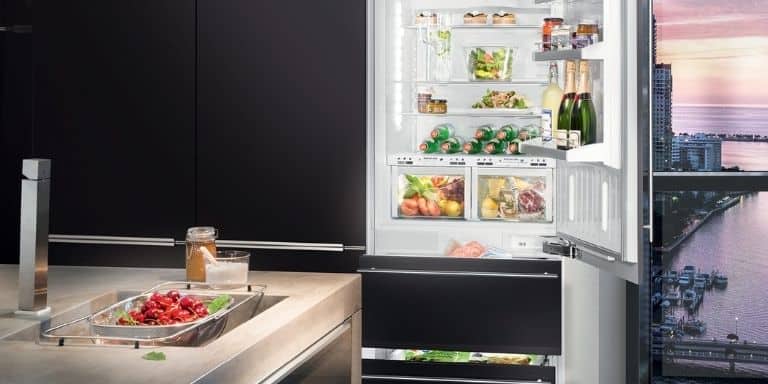 Old or new, a refrigerator sometimes all of a sudden switches off itself. And even when you switch it back on, it turns off again. This happens because of a tripped circuit breaker and usually, the refrigerator itself is tripping it.

Why does the refrigerator trips breaker?

Overloaded circuits and short circuits are the most common causes of tripped breakers. However, a ground fault or worn-out appliances can also create this issue. Regardless of the source of the tripping breaker, addressing it is the main concern. With few proper guidance, all of these are resolvable.

Now, this may not be enough for you to fix the issue. We have provided a detailed troubleshooting guide for this.

So let’s go right to the heart of the matter!

Why Your Refrigerator Is Tripping The Breaker? 4 Probable Reasons

A refrigerator can trip the breaker for multiple reasons. Even if this appears to be a little annoyance, the tripping of the breaker is actually a blessing in disguise. Circuit breaker tripping could be a warning indication of probable danger.

So, let’s check which one of the following causes match your situation. And then, depending on the scenario, you need to take appropriate action.

An overloaded circuit is one that has a higher electricity demand than it can handle. One of the most typical causes of a tripped breaker in a refrigerator is this.

We have a habit of putting two or more high-demand sources on the same circuit. As a result, the circuit becomes overloaded. And to prevent any possible threat, this situation makes the refrigerator trip the breaker.

The compressor of the refrigerator might also contribute to this overload. When the compressor winding starts to fail, it needs additional power to start the winding. This demand for extra power does not stop after a few seconds. This excess electricity overloads the circuit and trips the breaker.

If the refrigerator appears to be functioning normally, plug in other appliances at different outlets. But if the breaker continues to trip, you must check further to determine the cause.

In case of compressor malfunction, it is better to buy a new unit. You might be able to get it fixed by an electrical mechanic. But there’s no guarantee that it will last a long time.

In the case of a short circuit, usually, an outburst of electricity happens. And this outburst causes the breaker to trip. This happens when two wires are in contact with each other.

Both the refrigerator or the outlet can be the culprit behind this trip of the breaker. A damaged power cord of a refrigerator might also result in short circuits.

In such circumstances, unplug the refrigerator first. Plugin another appliance to test the outlet. If it’s working properly, the issue is with the refrigerator. If the second appliance is also not working, you need to do further inspection.

Remove the outlet cover to see whether there is any obvious damage. Check to see if any wires are loosely attached or melted. But don’t get confused if you notice connected black and white wires. That is not the root of the problem.

But if you do see anything unusual in the wires, call a professional to repair the outlet.

If you notice any breakage in the cord it needs to be replaced. If it’s a small gap in the cord then it can be fixed by tape. But if the wires are exposed you need to get them fixed. Many people recommend covering it in electrical tape, but that’s not the safest option.

Ground fault is essentially an unintended channel created by damaged appliances. In such cases, the electricity goes to the ground and breaks the circuit system.

It’s created when the metal screws on the side of the outlet contact the metal drywall ring. This is common with old house outlets where the screws are old, loose, and occasionally corroded.

When a ground fault occurs, you will not be able to simply reset your breaker. It will keep on tripping the breaker.

In order to get it to work properly, you’ll need to replace the outlet. In such cases, ask a professional to help you out with rewiring and installing the new outlet.

And while we’re on the topic, here are a few outlets we recommend. This will last you a long time without frequent malfunction-

Electrical appliances and outlets, just like everything else, have a timestamp. It is common for outlets to get rusted and broken over time. It becomes hard to plug into these outlets. The insulation around the wires thin out and becomes more prone to short-circuiting. Especially in the case of old houses.

After a particular period of time, the refrigerator also begins to show problems. The cord of a refrigerator might begin to buckle and rust. Any one of these reasons can cause the breaker to be tripped.

The most obvious option in such instances is to replace. The wiring may need to be replaced, and the refrigerator might have to be serviced.

In some circumstances, the wires can be simply repaired. In others, you may need to replace the entire system. Because one bad outlet can damage others as well. But before you make a hasty decision, properly inspect the wiring and the refrigerator.

We hope we were able to assist you in determining the reason for the tripping circuit breaker. Even if you have identified the problem, it’s always preferable to contact a professional when it comes to electrical repair.

Question: What is the lifespan of a refrigerator?

Answer: An average refrigerator can last up to 13 years, which is more than other home appliances. Dishwashers, washing machines, trash compactors last a lot less than a refrigerator.

Question: How hard is it to replace the compressor of a refrigerator?

Question: Can I use a regular outlet to plug the refrigerator?

Answer: Refrigerators can easily be plugged into outlets that have 110-120 volt. But in order to keep the refrigerator running properly, keep it in a dedicated unit.

That’s the end of the discussion on the refrigerator trips breaker. Even though breaker trips are inconvenient, they have the ability to save people from catastrophic harm.

Anyhow, if your refrigerator keeps tripping the circuit breaker, don’t be afraid to seek professional assistance.

Until next time, be safe!