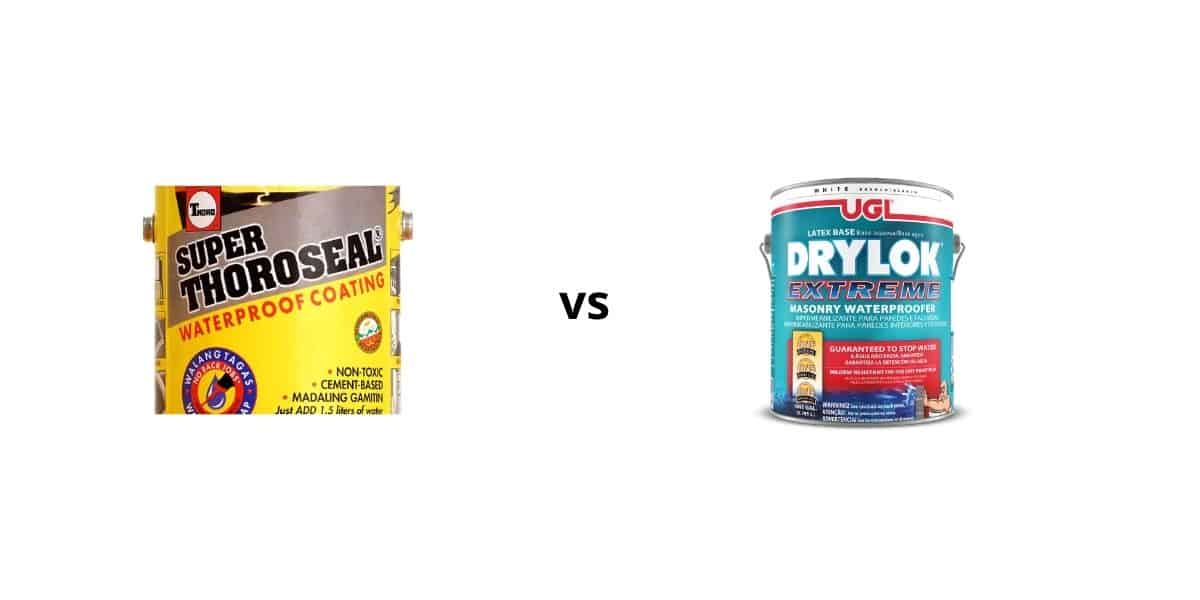 We know why you would be confused about choosing between Thoroseal and Drylok. Even though both can be used to seal and paint walls, they’re different things.

Which one should you actually choose, Thoroseal vs Drylok?

First, in terms of the quality of coatings, Thoroseal is a better choice. However, Drylok is simpler to apply. Also, Drylok has a greater vapor permeability. On the other hand, Thoroseal is more resistant to absorbing moisture.

As you can see, there are things you need to consider before buying one. But don’t worry! We’ll be analyzing their differences in detail below. So, read on!

Thoroseal vs Drylok: A Quick Comparison

By definition, Thoroseal is a cement-based coating made of latex. On the other hand, Drylok is a paint made of latex and oil with a sealant’s properties. So, you can say that they’re different substances serving the same purpose.

The use of these coatings can serve various needs of your walls. So, you don’t need to cover the damaged parts of your concrete wall by hanging pictures! They will fix your wall perfectly. But the question is, which one would do a better job?

Before we go into the details, let us look at the key differences between Thoroseal and Drylok.

Here is a table summarizing these differences for your convenience below:

You’re bound to be still confused by this quick comparison of their differences. That is why we’ll explain all these key factors in detail below. So, stay tuned!

A Detailed Analysis of Differences Between Thoroseal & Drylok

Within the same price range, you can fix damaged walls like how you’d fix distorted mirrors! However, you need to consider certain factors to make a correct decision. After you do that, you can figure out which is more convenient for you.

Without further delay, let’s discuss the possible factors that should be considered-

Thoroseal surpasses Drylok in terms of quality. The coating provided by Thoroseal is extremely firm and hard. This makes Thoroseal more durable too. Because the walls would be prone to receiving more damage there.

Drylok is comparatively lighter and the quality isn’t as great as Thoroseal. It’s also less durable than Thoroseal. So, the properties and quality of Drylok make it suitable for DIY projects. Their difference in quality makes Thoroseal more suitable for commercial purposes.

You have to make your choice wisely!

Difference 2 of 4: Convenience in Usage

A higher-quality Thoroseal comes with the price that it needs to be used more delicately. You need to prepare the coating mixture carefully and with caution. For instance, before applying Thoroseal on walls, you need to create a mixture. You can only use it after letting it set.

You also need to go through the hassle of misting your walls before applying Thoroseal. However, using an 8” wide painting brush will make your work a lot easier for you!

So, if you don’t have one, now’s your chance! Here, we are recommending the best 8” wide painting brushes below:

Don’t let the chance of your painting productivity escape and order one today!

If you want to avoid facing these hassles, Drylok would be a preferable selection. Applying Drylok on huge walls is even simpler than refinishing furniture made of teak. You don’t need to go through the trouble of mixing it. All you need to do is paint with it normally.

Additionally, Drylok is made of a lighter substance, coating with it is very convenient. It’s this simple!

Drylok has greater vapor permeability than Thoroseals. This means the vapor getting inside the coating of walls will help to dry it faster.

Drylok takes a lot less time to dry after applying a full coat. You’ll see that after two full coatings, Drylok takes around 9-10 hours in total. For Thoroseal, you’d need to spare around 24-48 hours.

If you have a shortage of time and want a quick coating, Drylok would be the right choice.

Moisture issues are actually related to the ability of coatings to handle water pressure. If your wall can’t handle moisture well, it’ll cause dampness in the building.

The pressure unit used here is PSI (Pounds per square inch) to measure how well moisture is handled. Thoroseal usually has a resistance of around 200 PSI. As for Drylok, the resistance is around 15 PSI.

It’s obvious which one would give you better protection against moisture.

Which One Should You Choose: Thoroseal or Drylok?

In the end, do you wonder which one is our recommendation?

If you’re applying the coating for long-term usage of your building, go for Thoroseal. What about a quick DIY coating project indoors? Then Drylok would be a more efficient choice.

In the end, the decision is yours!

Question: How long does it take for Thoroseal to dry?
Answer: The full coating of Thoroseal is done after the wall has been coated two times. It takes 12-24 hours for each coating to dry. So, to dry your walls completely, you need to wait 24-48 hours.

Question: Does Drylok cause mold?
Answer: Drylok paint is made of a certain food source. Molds like to grow on such food sources as it grows on wood. So yes, there is a high chance that Drylok can cause mold.

We hope we’ve helped you come to a conclusion in choosing between Thoroseal vs Drylok.

Consider the factors. Then take time to look at your purpose in using these coatings. These two things will certainly help you make the ultimate decision.