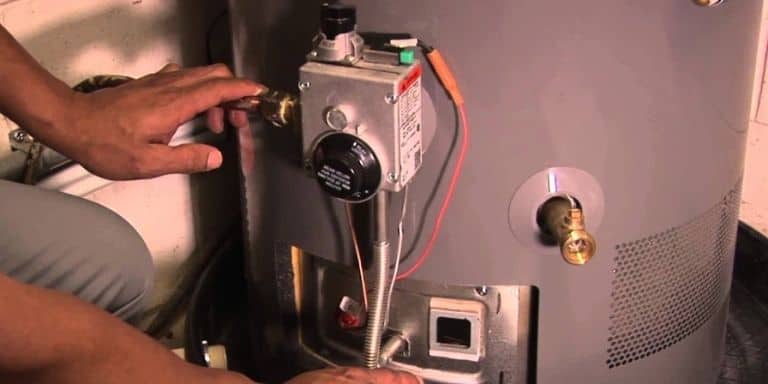 Perplexed by the shock of getting cold water instead of hot water? But you were sure your heater was working as your pilot light was on.

Don’t worry this is a common phenomenon.

Why is your pilot light lit but no hot water?

It’s probably because your heat sensor is faulty or your gas valve wasn’t on. Few other factors such as a faulty thermocouple or sediment buildup play a role. Each of these problems can be easily solved.

Interested to know more? We’ve put together a guide to help you fix this problem.

Why Is Your Heater Not Heating Water?

The reason behind your heater not heating water lies in the combustion process. The key players in this are the pilot light, thermocouple/thermopile, main burner, and gas valve.

The pilot flame burns the thermocouple up to the triggering temperature. This in turn signals the main burner to start.

It is inefficient to add water to a heating system like this, compared to a geothermal loop. Conventional heating systems like these are also inexpensive.

Forgetting To Turn The Knob

Forgetting to turn on the gas valve from pilot to on is a common culprit. This might be why there is no hot water despite the pilot light being on.

Keeping the gas knob on the pilot only shows you if the pilot flame is functional. It doesn’t turn on the gas line for the main burner.

Solution: Turning On the Knob

After you establish that you have forgotten to turn on the gas connection. Simply test the pilot light before, then turn the knob to “on”.

This will allow a gas connection to the main burner causing the water to heat.

Having a faulty thermocouple/thermopile may hinder the ignition of the main burner. This may be why your propane-fueled heater struggles to stay alight.

Before taking it apart and troubleshooting your heater, you’ll need these tools.

If you’re unsure about which multimeter to choose, take a look at our picks below:

Now that you have your tools, let’s get started.

First, remove the bottom cover. After that, set the multimeter to Volts-DC. Remove the thermocouple from the control valve with a tool wrench.

Anything under these ranges, the pilot light will have trouble being lit.

Turn off the main gas supply. Wait for everything to cool down before turning the control knob to the off position.

Remove the two screws that hold the burner in place, using a screwdriver. Unscrew the thermocouple, pilot tube, and manifold tube. Then, slide out the assembly.

Step 4: Take Out And Replace Thermopile/Thermocouple

To access the thermopile/thermocouple, remove the component block/plug holding it. Remove the pilot assembly and shield from the burner using a screwdriver.

Thermopiles and Thermocouples have differences. So they require different approaches to reattach.

Push the wires out of the manifold door. Then, free the thermocouple from the plug. For the thermopile loosen the clip that holds it in place.

Afterward, align the pilot assembly to the burner and screw it into place.

Fit the burner assembly into the tab and slide it into the bracket. Next, align the manifold tube into the control valve and adjust with a wrench. Screw the thermocouple/thermopile and fit the pilot tube with the wrench.

Then, tighten the door screws and reconnect the wires to the thermal cutoff switch. Finish off by connecting the ignitor wire.

Don’t forget to turn on the heater and see if it’s working. While it’s running apply a soap solution to the pilot and manifold fittings. If there are bubbles then there’s a leak.

The process differs if you set your heater horizontally or vertically. We’ve provided solutions for a vertically set heater.

Remove the pilot assembly and shield from the burner using a screwdriver.

Naturally occurring minerals such as calcium and magnesium gradually build up in the tank. This sediment buildup acts as an insulating blanket for the heater.

This results in the water not heating as efficiently as before. In some extreme cases, the heating mechanism stops working.

The steps needed to do drain the sediment are described below-

Turn the gas pilot to the “pilot” setting. Turn the shut-off valve to turn off the supply of cold water.

Turn on the nearest hot water connection, to let out the hot water.

Connect the drain valve to a garden hose. Make sure the hose’s end is pointing towards a sink.

By opening the drain valve, you can allow the water to flush out of the tank. You’ll probably see discoloration in the draining water as the particles flush out.

In extreme circumstances, you may need to refill the tank with freshwater. Drain it again to eliminate all sediments.

Open the cold water supply when you’ve successfully drained the tank. The tank will be refilled as a result of this.

After that, turn the gas control valve to “on.”. Next, ensure that the gas burner starts properly.

To summarize, this is how you assure a constant supply of hot water in your home.

Question: What sets the reset button on the water heater off?

Answer: When the temperature reaches an excess of 180 degrees Fahrenheit, it sets off.

Question: How do I check whether or not the thermostat in my water heater is faulty?

Answer: If you switch on the hot water faucet and only cold water comes out, the top thermostat is broken. However, if the water is hot and then cools, you have a faulty lower thermostat.

Question: What is the estimated time for your water to heat after a rest?

Answer: It may take between 12 and 24 hours for your water heater to regain regular performance once it has been reset.

Now you know why your pilot light lit but no hot water supply. Hopefully, you’ve realized how to properly join PVC pipes without an adhesive.
Till then, stay safe and good luck!