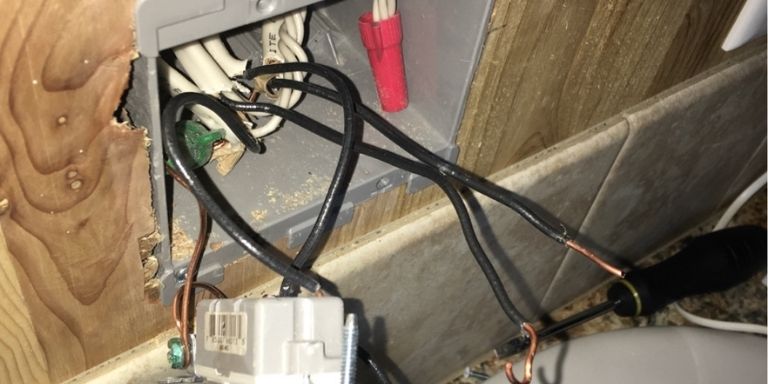 You want to daisy chain several outlets to one single circuit breaker in your room. But you’re not convinced enough if daisy chaining outlets is a safe thing to do.

Is it good practice to daisy chain outlets?

Daisy-chained outlets are not a good option for your home. It’s advised to refrain from daisy-chaining more than two outlets to a single breaker. The chance of overloading the circuit hugely increases due to daisy-chaining. It can damage your appliances, as well as carry high chances of electrical accidents.

Don’t leave just yet. We’re going to discuss this topic in more detail, helping you understand it better.

What Does Daisy Chaining A Receptacle Mean?

There are two methods of wiring up an electrical outlet. The first one is parallel wiring, and the other is series wiring, also known as “daisy-chaining”.

Electrical outlets come with 4 terminals. Two of them are brass and the other two are silver. There’s also a green single ground terminal in the mix. These terminals allow one to daisy chain multiple outlets to a single circuit.

People who want to have multiple outlets in a room tend to adopt this circuit system. Although it outright violates the electrical code in some states, many people still practice this system.

Is It Safe To Daisy Chain Outlets?

The answer can be both yes and no depending on a few factors.

The process of daisy-chaining outlets requires installing multiple outlets on a circuit. This increases the chance of overloading the circuit breaker, leading to electrical accidents.

The sum of voltage drops is equivalent to the total voltage in daisy-chained circuits.

Multiple wired outlets will only eat up the voltage of the single circuit in this way. The last outlet of the series will receive low voltage if all outlets are plugged in. Compared to parallel circuits, which provide equal voltage, this is unacceptable.

Furthermore, having multiple outlets connected to a single circuit can also be troublesome. If the breaker blows due to an overload, it’ll render all the outlets dead.

It’s easy for one bad outlet to affect others in daisy-chained circuitry. So it’s not surprising that daisy-chaining goes against the code.

If you’re to implement a daisy-chained circuit system, you better choose your devices carefully.  It should be okay if all you have is a bunch of low-power consuming devices. Nevertheless, you should be well-informed about their requirements.

Take a few minutes to look out for the power consumption rate of the devices. A typical phone charger draws about 5-20 watts of electricity. This number will scale higher for laptops which consume roughly around 100-300 watts.

Daisy-chaining is safe as long as the consumption rate doesn’t overwhelm the capacity of the circuit. You can choose to use GFCI outlets with other outlets which can provide indications about your outlet.

Searching for good quality GFCI outlets for your house? Look no further! Here are some of our top picks for you-

These are flexible and long-lasting GFCI outlets, providing you with good value for your money.

We can agree that daisy-chained outlets are safe as long as certain protocols are followed. Even so, you should follow the electrical code set by the state you live in.

How To Reduce Safety Hazards Of Daisy Chain Outlets?

To stay on the safe end of things, you shouldn’t try to exceed consumption past 1500W. It’s not wise to push voltage usage to the maximum. One should always be careful when dealing with electrical appliances.

You should keep an eye on the cords at the very beginning of the chain. Be sure to inspect it periodically to see if it gets slightly warm. If it does get warm, this is an indication that you’re probably pushing things.

Each connection in the circuit system increases the resistance. This can cause the circuit to heat up.

Don’t take the events of a blown fuse or tripped breaker lightly. A breaker isn’t manufactured to withstand too many blow-offs. Plus, a tripped circuit breaker is a red flag, meaning that the wiring has already been overloaded. Don’t push it!

What You Should Keep In Mind About Daisy Chain Outlets?

NEC allows the wiring of 15 amp outlets with 14 gauge wires. However, you should opt for 12-gauge wires, as they will be the safer option.

If you’re dead set on implementing a daisy-chained system you should go with the pigtails method. It’s considered the best practice for daisy-chaining receptacles even though it demands extra labor.

Use the wire, breakers, and plugs with the correct rating before chaining them with the circuit. Wire multiple GFCI in one circuit as it can stop the other outlets from a power surge. Avoid daisy-chaining more than two outlets to a single breaker.

You shouldn’t go for wiring the electrical outlets if you’re not an expert electrician. Seek the help of a professional for such matters. Make sure to cut off the power supply before handling the outlets and circuit breakers.

Lastly, we suggest completely dropping the idea of wiring your circuit with daisy-chaining outlets. Parallel wiring is far more reliable and safe for your devices and circuit. It provides a constant voltage to all the connected devices and is safer.

Question: Does leaving an extension cord plugged in consume electricity?

Question: How many watts can an outlet handle?

Answer: A typical outlet can direct about 18,000-20,000 watts. However, it’s best not to push to that number. One should stick to a maximum load of 15,000 watts per outlet. Carefully choose the devices you want to plug in your outlet based on their power consumption.

Question: How much watts does a refrigerator use?

We’ve learned how daisy chain outlets work. If you’re aware of your electricity consumption and how your circuit works, you should be fine. But we recommend you to avoid daisy-chaining outlets and go for better alternatives.

Hope we succeeded in answering what you’re looking for. Have a great day!