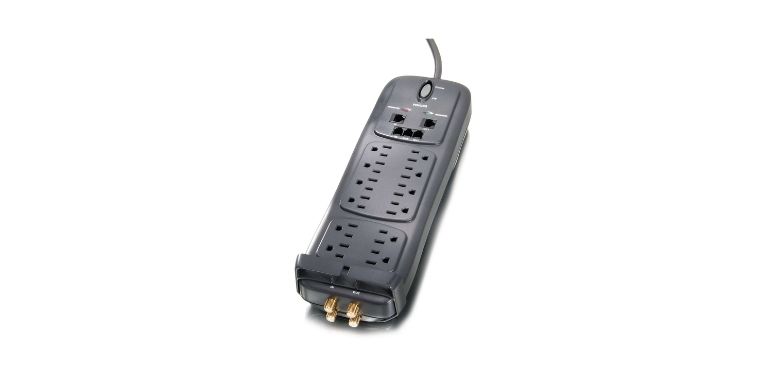 If you are pondering about their compatibility, don’t worry, I understand. But getting the answer is important. Otherwise, your safety along with your family’s will be at risk.

Can you plug a surge protector into a GFCI outlet?

In short, it is possible to plug your surge protector into your house GFCI outlet. But you have to ensure that there’s a ground wire in your circuit that goes back to your electrical wire. Still, there can be issues. This is because the surge protector can trip the GFCI outlet triggering small leakages.

This just lightly touches the entire topic. If you wish to understand their compatibility in detail, read along to know more! Because I’ve added every little detail about them.

In order to fully understand if surges work with GFCI, we must understand the differences.

Let’s look at their definitions:

A GFCI outlet constantly monitors the current flowing in a circuit. This is to detect any sort of fluctuations. A GFCI outlet is designed to break the circuit every time there’s an imbalance in the flow of current.

That’s why an electric appliance like a hairdryer slips into a sink. Then the GFCI outlet will sense the interruption. The outlet will then immediately cut off the power. This ensures electrical safety.

These GFCI outlets are designed to cut off electricity before reaching your heartbeat. So, it functions by looking for current imbalances.

Preferably it’s used in moist or wet locations of the household. GFCI outlets are used mostly in:

GFCIs are of three common types. These are outlets, circuit breakers, and portable. Additionally, they can also be utilized as a split receptacle GFCI.

On the other hand, surge protectors protect against excessive voltage. These voltage or power surges can be caused because of lightning strikes.

Surge protectors are used to protecting appliances. Whereas, GFCI is meant for personnel protection.

It’s common to think both devices are the same. This stems from the fact that surge protectors protect us from voltage surges.

These surges can cause fires and even electrocution. Since surge protectors avoid this, they are also saving human lives.

But we should know that this isn’t the only purpose of surge protectors. It does so to only protect the appliances from incurring damages.

This belief is also wrong because GFCI outlets can’t prevent surge damage. It can only protect human life by tripping from as low as 5 milliamps or electricity. A trip can be indicated by the yellow light of the GFCI outlet.

It is now clear how these two are different and also why customers want both.

Can We Use Surge Protectors With GFCI Outlets?

Now that I have established all that, let’s get into the main discussion. Can we actually plug surge protectors with GFCI outlets?

Well, the answer is yes, but there are occasionally some complications.

What do I mean by that?

If you connect a surge-protected strip to a GFCI, there will be a negative interaction between the two. Technically, surge protectors don’t pose a threat or risk to your GFCI outlets.

But don’t attach multiple devices to the surge protector. Otherwise, the GFCI trips. In serious cases, this can lead to house fires. And if you didn’t know, it’s hard to put out house fires.

Some surge strips have indicator lights. These indicate if the polarity or wiring of the plug is correct. These indicator circuits connect to the ground. This can cause an imbalance which trips the GFCI.

GFCI outlets only need 5ma to trip. So, they are prone to tripping from small leakages caused by the circuit. You can overcome this by simply using surge strips with no indicators.

Surge Strips normally have Metal Oxide Varistor (MOV). MOV is a voltage-dependent resistor. If there are MOVs between the power conductor and the ground, it can cause leakage. This leakage also causes GFCI outlets to trip.

MOVs can conduct up to 5000 amps, whereas GFCi trips with as little as 10 milliamps. So it’s self-explanatory why a few small spikes caused by MOVs can trip a GFCI outlet.

Another reason can be the deterioration of insulation in the surge protectors. This trips the GFCI every time a faulty device is plugged in it.

But a well-designed surge protector shouldn’t leak enough current. As a result, it won’t be a problem for the GFCI outlet.

All of this basically disconnects all the devices ruining our intended purpose. Especially, if important devices are being plugged into the outlet.

Some appliances installed require to follow a specific shut down method. It can be a problem if GFCI trips from surge protector leakages. Consequently, appliances that are harmed by the sudden loss of power are a big concern.

Multiple devices, damage to devices incompatible with hard shutdowns are the primary concerns. Consequently, plugin power-hungry devices into the joint outlet is also a problem.

How to Prevent False Trips?

You can prevent false trips by installing a main panel suppressor. Use suppressors with a dedicated standard inverse time double pole circuit breaker.

This is also called a ‘whole house’ surge protector. Alternatively, you can also look for surge strips with built-in GFCI. They tend to be more stable and work better than manual plug-ins.

How to Safely Use a Surge Protector With a GFCI Outlet?

Most electricians will say that this method is safe. Also, most electric and fire safety codes do not warn against this practice.

For your safety, I’ve suggested some great surge protectors for your GFCI outlet-

Get any one of these and stay safe!

Question: How much electricity trips a GFCI outlet?

Answer: A GFCI outlet can trip from as little as 5 milliampere leakage from the hot wire to ground. This may be difficult to avoid in normal circuits.

Question: Does having a GFCI connected with surge protectors help?

Answer: GFCI does not protect equipment against surges of voltage. Instead, sometimes, leakage from the surge protector can cause the GFCI to trip and force a shutdown of all appliances.

Answer: Yes, they are widely available and more stabilized. Less unintentional GFCI trips occur in these.

That’s all on can you plug a surge protector into a GFCI outlet. If you still face issues, consult with a professional.

Again remember, it is safe to plug a surge protector into a GFCI outlet. But, it might not always function properly.

That’s why if this is attempted, use a high-end surge protector. Or, use surge strips with in-built GFCI to avoid unintentional trips.