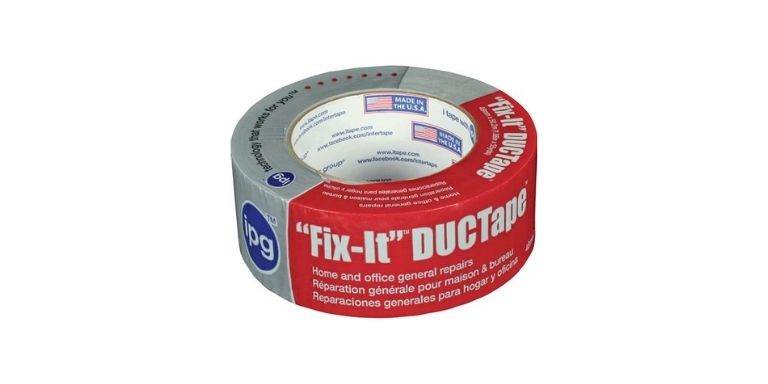 Electrical wiring with electrical tape isn’t a rational decision. But when you’re short of that tape you’d search for the alternatives. There you might consider duct tape as a substitute for electrical tape.

Can you use duct tape instead of electrical tape?

These chunks of words aren’t enough to answer your query properly. That’s why we have a complete article answering whether it’s possible to use duct tape.

Without bragging more, let’s go for our discussion!

Duct Tape As An Alternative to Electrical Tape: Yes Or No?

You’re quite knowledgeable about the pros and cons of both of the tapes. So if you’re asked if duct tape is a good alternative to electrical tape what would you say?

Well, no worries if you’re still confused, let me clear your confusion.

As the name suggests, electrical tapes are used in electrical wiring. Wiring is a fundamental part whether it’s wiring your house or your broken electronic gadgets.

Here, we’ll try to find if our substitute, duct tape, is worth enough to sustain electrical wiring.

We’ve already known duct tape is a combination of fabrics and rubber-based adhesives. They are cooperatively less sustainable than the electrical tape.

Here sustainability, heat, or water-resistance measure is vital to consider. Because this wiring is not a temporary task. The binding should last for years. And also they have to bear heavy rain or resistance to heat over time.

Therefore to stick this binding perfectly we need a perfect tool to make the binding last long. But we know duct tape is not a good option against water or heat resistance. Also when they’re, the adhesive gradually loosens down and will make the connectivity insecure.

Eventually, they can easily catch fire. Also, they aren’t insulated and have no protection against electrical shock.

Ultimately the duct tape is never a good alternative for electrical tapes. It won’t make your job done. You might think it’s working for a few weeks. But after some months or years, you’ll face the real dark side of using duct tapes.

Try to check the durability and adhesiveness properly so that the seller can’t ditch you. Otherwise, electrical tape won’t ensure your protection as you want.

We already know where to use the electrical tapes. But you might wonder why we need to know about their differences?

Now you can’t choose any alternatives you want. Rather you’ll choose those substitutes that match the properties of an electrical tape. And can afford to patch electrical wiring.

For this very reason, I’ve decided to enlighten you about their common contrast. It’ll provide you with an overview of basic properties and contrast. So that you can derive your decision accurately.

Whatever it is let’s learn about their properties and contrasts-

Duct tape is a combination of three different materials with a triple layer. The bottom layer is made of rubber-type glue.

The middle one is composed of a fabric that provides enough durability. And lastly, the top layer is coated with plastic named polythene.

The combination of these three layers makes it used for any kind of product starting from wood to plastic.

However, masking tape is suited well in woods but removing masking tape from wood is a hectic task. So you can use duct tape as it’s comparatively easy to remove from wood.

On the flip side, the electrical tape is a bit stretchy. It is primarily made of two types of material. The upper sticky layer is made of PVC (polyvinyl chloride). The bottom layer is of rubber-based adhesive.

Due to its sticky structure, it’s a bit hard to tear apart compared to duct tape. Also, this PVC backing makes it stretch and easy to stick around rubber cables.

If we’re interested in their strength, duct tape would take the lead. The fibers of the fabric-coated layers make it super strong to tie bonds.

Sometimes the fabric part is also called the scrim. It lies in between the rubbered layer and silver backing. Also, this part makes it easy to tear down and stick when laid over the surface.

Electrical tape is also strong but not for all types of surfaces. It can afford up to 600V of electricity. Also, it sustains up to 176 degrees Fahrenheit.

However, it’s protective in case of UV rays, fire, acids and alkalis, and many more. Therefore electrical tape is especially good at electrical wiring and binding.

Duct tape is rich in different color combinations. You might wonder why tape color is important. Well while you need to categorize any utensils you can use them as flag points.

You can use different colorful duct tape to trace specific utensils. It’ll help you to identify specific products.

On the other hand, electrical tape is commonly found in black. It also has some other color variants like red, green, yellow. However, these are used for identifying specific wires like ground wire.

For instance, to solve the electrical outlet grounding issue we use green wires. Therefore electrical tape is primarily centered on working with different types of electrical wirings.

In this criteria, duct tape gets a negative review. They easily lose their adhesives while in contact with water. Also, they are very heat-prone and lose their stickiness under high temperatures.

In the case of electrical tape, it’s much better durable to both water and heat resistance. However, don’t misunderstand that this tape is waterproof.

In addition, the shelf life of electrical tape is much higher than that of duct tape. However, if they stay for too long, their adhesive starts to decompose and loosen the bonds gradually.

In this way, we can depict the most common attributes and their contrast in a nutshell. This will help us to decide if it’s a good substitute for electrical tape or not.

As duct tape isn’t a good alternative to electrical tape, we should learn something new. That’s why in this bottom segment we’ll introduce you to some fantastic substitutes for electrical tape.

One of the best substitutes would be using the heat shrinking tube. You can’t find a single better option than this tube instead of electrical tape. However, you’ll also need a heat gun to perfectly shrink to the joint.

Another good option is to use the wire nuts for electrical connection. These insulated capes are twisted at the end of the stripped wire. They are also available in different sizes. It can be quite handy when you’re short of electrical tapes.

That’s all we’ve for you. Hope you’ve understood why duct tape is not preferable instead of electrical tape.

Answer: No, it’s not flammable to fire. It’s usually made of mesh fabric and polythene. Due to its structure duct tape is inflammable. Also, a coating of rubber surrounds it. That’s why it’s duct tape is free from fire.

Answer: Duct tape can afford up to 200 degrees Fahrenheit. Duct tape usually fires safely but is not reluctant to catch fire. Therefore while working with duct tape be sure it doesn’t exceed the stipulated temperature for starting to melt.

Answer: No, they aren’t. It’s not possible for the adhesives as it doesn’t meet their properties. When the tape gets wet, the adhesive is likely to lose its properties. Also, it’ll not be able to hold its shape under pressure.

After a long conversation, it’s time to wrap up. We’ve tried our heart and soul to answer your query about can you use duct tape instead of electrical tape. By going through our complete writing you should be occupied with your desired answers.