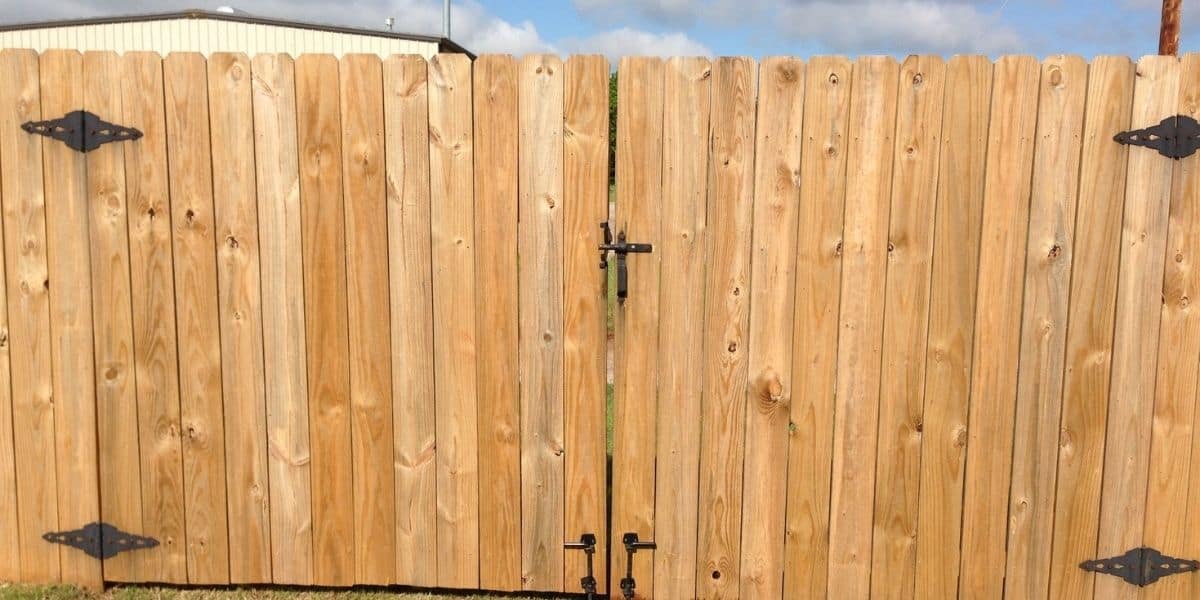 The wind is the biggest enemy of all for the good old double gates. It’s as if the wind doesn’t want the double gates to rest in peace. No, they have to blow over them and slam them together whenever they pass by.

How to avoid double gates blowing shut before the wind knocks them down?

You got to install a latch to prevent this from happening. Now, to get the job done you need to hammer a pipe into the ground. Then you can move on to installing both lower and upper brackets. And lastly, place the cane bolt between them to lock up the gates.

But hold on; that’s not all. This was only the summary. We have a much more detailed guide stored up for you. So, buckle up because we’re about to start the ride.

How to avoid double gates blowing shut: Gates vs wind

You never know what the mischievous wind might be up to. This unruly element can sometimes bring soot to your toilet seat. And other times they shut your double gates without giving it a second thought.

Since you can’t take action against the wind you must enforce the double gates. Now, this will only take you 5 minutes so you don’t have to worry too much about spending too much time.

And once you’re done you’ll have a gate that’ll be able to stand up against the wind. So, let’s take a look at all the steps for this process, shall we?

Step 1: Hammer a pipe into the ground

The first step is to hammer a pipe into the ground. Now, this isn’t heavy construction work so there is no need to worry about water crawling into your basement.

In fact, it’s a very simple job. All you gotta do is open the gate and stretch it and see how far it goes. Then you need to mark the place that’s right below the edge of the gate.

You see, that’s the place where the pipe will end up. Later on, you should hammer the metal pipe into the ground.

Now make sure it goes right into the ground so that the gates can slide over it smoothly. You certainly don’t want the pipe to interfere later.

Once the pipe is in its place you have to install the lower bracket. And for this, you need some nails and a screwdriver. You can also drill some pilot holes if you think they are necessary but that’s on you.

But you have to screw the nails right into the wooden gate through the holes of the bracket. By the way, the lower bracket, suggested by its name, goes at the lower side of the gate.

Step 3: Use the cane bolt to take measurements for the top bracket

After the lower bracket is dealt with you need to take out the cane bolt and hold it on the wooden gate. This will give you an idea of where the upper bracket will go.

You see, randomly placing the bracket will not work as it won’t be able to close up the gate. So, you need to find the right position and mark it using a pencil.

On another note, if you wish to make your job easier, you might consider grabbing a quality brad nailer right away.

Afterward, you need to install the upper bracket in the place that you marked. And needless to say, you ought to remove the cane bolt first. Otherwise, it’ll get in your way.

As for the installing process, it’s the same as placing the lower bracket. Yes, you only need to attach the screws in the holes and that’ll attach the bracket.

Step 5: Place the cane bolt through both the bracket

Lastly, you have to place the can bolt through the two brackets. Do this for both sides of the gate and then you’re done.

You’ll be able to lock up the door when they are fully opened and the wind won’t be able to mess with it.

Plus this method isn’t expensive at all, unlike turning a sunroom into a bedroom. So, you can save your wallet from getting empty with this process.

Question: How do I get my gates from slamming?
Answer: To stop the gate from slamming all you can install a gate stopper. This handy item reduces the damage that the gates face when they slammed.

Question: How much space do you need between the double gate?
Answer: The minimum distance between double gates has to be ½ inch. This way friction won’t act between the gates.

Yep, that’s all you have to do to prevent the gates from blowing shut. Since you now know the answer to your main question: how to avoid double gates blowing shut, you can take actions yourself.

So, we hope you get out there and give this method a try. Do let us know how it turned out. We’ll love to read your feedback.

Till next time folks. Adios!