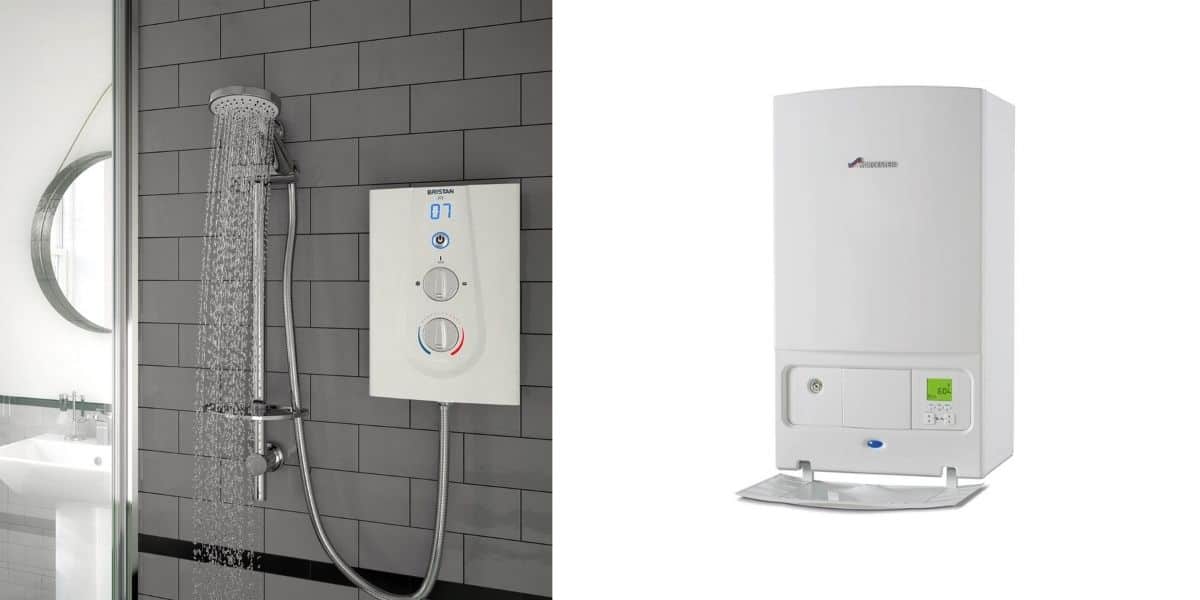 Bought a new home and decided on what type of shower to use? We’ve got your back.

Deciding between an electric shower vs combi boiler can be pretty hard. But we’ve covered the prime differences for you.

That was just the cherry on top of the cake. To really understand the difference between the two, keep reading.

How Do These Showers Work?

So let’s understand the mechanism behind the showers.

We know that both of them provide hot water for us. But how exactly does the water get heated?

As the name suggests, an electric shower used electricity to heat up water. Think of how a hair dryer uses a heating filament to blow hot air. Similarly, electric showers use heating elements to instantly heat water.

This element gets heated when you turn the switch on. Next, cold water passes through the heating element. As a result, the water heats up.  This hot water is then released by the showerhead.

So you basically have an unlimited hot water supply. This is great for families with many members. As there’s no waiting time. But sometimes, you may face an overheated shower cable problem. Don’t worry, this can easily be fixed.

On the other hand, combi boilers can be considered as a whole heating system. When you turn on your hot water tap, the gas burner is triggered. So you get hot water almost instantly.

The best part about combi boilers is that they’re space-efficient. After all, there’s no need for tanks or reservoirs to store the hot water. So that’s a short overview of how combi boilers work.

Now that we have a basic idea about the heating systems, let’s look at the difference.

Electric Shower Vs Combi Boiler: At a Glance

Before going too in-depth, we’ve provided a table comparing the two:

Well, don’t jump the gun and buy one now. Let’s go a little bit further and see what’s best for you.

Alright, at this point, we’ve had a  small introduction to their comparison.

Now, let’s place them head-to-head on some basic criteria. Thus, choosing between them will be a breeze for you. Let’s begin.

When choosing a heating system, the first thing to consider is the cost. Although this may not seem like a big cost initially, the bills eventually add up. Plus if you’re renovating, tiling your bathroom will bear huge expense too.

Thus, choose one that gives you the best output at the lowest cost.

An Electric Shower is Expensive

Since an electric shower runs on an electric supply, it’s pretty expensive. Even if it uses a bit of electricity, the bills quickly pile up.

Especially if you have a lot of members in your family. This option can easily strain your bank balance.

But not all electric showers need not break your bank. Here are some budget-friendly options which require less electricity:

A Combi Boiler is Relatively Cheaper

Since a combi boiler runs on gas, it’s definitely cheaper. That’s because gas is about 1/3rd the price of electricity.

However, this again depends on your availability. Do you live in the countryside where gas isn’t easily accessible? Then an electric shower might be the best option for you.

After checking off the cost factor, let’s talk about water pressure. When showering after a long day, many of us enjoy a heavy shower.

Thus, let’s check out the winner in this segment.

With eclectic showers, cold water passes through a hot coil before falling. Thus, electric showers have a heating limit. You just won’t get the same output compared to a traditional or combi boiler.

That’s why an electric shower is best suited for light use. Most electric showers are low to moderately powerful.  So we can say that you must sacrifice the water pressure for ease of use.

Coming to a combi boiler, this provides a great water flow. You can enjoy a soak and easily wash off the shampoo from your thick hair.

Moreover, it offers enough water pressure to enjoy long showers. But this can have a negative side to it. You see, a high-pressure shower will make you want to shower longer.

Last but not the least, let’s talk about heating efficiency. This implies how fast the water gets heated and its heating capacity.

If you need large volumes of hot water at a time, then a combi boiler is best. But, light and efficient systems might be preferred in smaller homes or gyms.

As you already know, an electric shower heats up water rather quickly. Also, it doesn’t have any reset time. Lastly, all the heated water is used. So ultimately, there’s no waste.

But you’ll need a functional isolator switch, since electric showers may overheat.

Now a combi boiler also heats up pretty fast. But it has a reset time. So, you can’t immediately shower after someone’s used up the hot water.

Also, all of the heated water doesn’t get used. As a result, it leads to energy waste.

Question: Do I need a plumber to replace an electric shower?
Answer: Yes. Since you’re dealing with electric wires and plumbing, don’t tamper on your own. Instead, seek professional help.

Question: What are the disadvantages of a combi boiler?
Answer: Combi boilers are difficult to set up. Other than that, it also has less heating efficiency than an electric shower. Unlike an electric shower, you can’t shower immediately after someone.

Question: Can electric showers electrocute you?
Answer: No. This is because the electric wire doesn’t touch the water. Thus, there’s no chance of getting electrocuted.

With that, we come to the finishing line. Hope you enjoyed our content and found our comparison useful. Remember that a combi boiler is cost-efficient, but an electric shower has more heating efficiency.

So, choose one that aligns with your needs.

Found other differences between electric shower vs combi boiler? Do let us know.

Until then, stay safe!