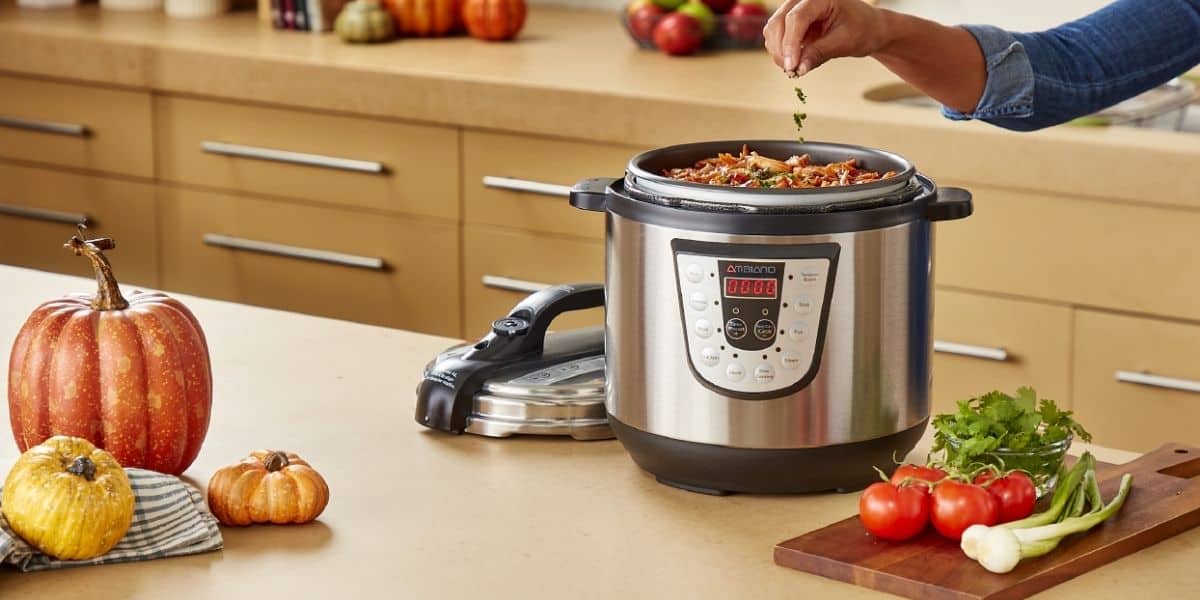 You might have seen some dramatic movies where the pressure cooker ends up exploding when water dries up. So, that might get you thinking if it’s true or not. Well, to answer that question you must ask another question.

What happens if a pressure cooker runs out of water: does it explode or does it have mercy on you and stays sane?

Once the pressure cooker runs out of water two things can occur. Your luck can be in your favor and the safety features such pressure regulators and safety plug can kick in. But in the worst-case scenario, your pressure cooker might explode.

Hold on. No need to get scared yet. Let’s take a look at how safe modern-day pressure cookers are. This will take your mind off of the explosion.

What happens if a pressure cooker runs out of water?

A kitchen is relatively a dangerous place. You never know when the gas fireplace may light up automatically and cause a disaster. Or a pressure cooker might end up drying out all the water in it.

You never know what might go wrong in a kitchen. For example, the gas oven might startup on its own. So, you need to be on your feet when it comes to cooking.

Now, there can be some moments when you forget to turn off the pressure cooker. That’s when it dries up all the water inside it. However, before anything goes wrong the safety features dive in to save the day.

Firstly, the pressure regularly blows off. Well, it doesn’t fly off to the end of the room. It simply lifts off the lid to let the pressure out.

You see when the water dries up inside the pressure cooker a huge amount of pressure builds up in it. And it has to let go of the pressure. Otherwise, things might take an ugly turn.

So, it slightly lifts off the lid so the trapped air can escape their prison. And with this, you hear a hissing sound. That’s your sign to check up on the pressure cooker. Don’t ignore the cooker’s call for help.

You see those plugs are sensitive to pressure. If they end up detecting too much pressure inside your cooker they immediately meltdown.

That’s when the pressure cooker gets disconnected from their power supply. And end up turning off before anything goes wrong.

However, in the worst-case scenario, your pressure cooker might end up exploding if it gets too dehydrated. You see, the pressure inside your cooker becomes greater than the outside pressure.

That’s when the air particles start jumping to get out. And at one point when they get enough energy they burst open the pressure cooker.

Now, this can be very dangerous for you. You might get serious injuries from this. Moreover, if you do get spared, your kitchen will definitely be a mess.

That’s because the food in your cooker will be everywhere. And you’ll have to scrape the food from your pressure cooker and the entire kitchen with a brush.

Question: Why is my pressure cooker not whistling?
Answer: One of the most common reasons for not hearing the whistling sound from your pressure cooker is because of clogged up lids. You see, food and dust can block the exit point of the cooker. If you simply clean it up the whole issue will be solved.

Well folk, we hope you got the answer to the question: what happens if a pressure cooker runs out of water.

Yes, there are some safety features that come with a pressure cooker. But that doesn’t mean you should be careless about it. Always try to make sure there is enough water in the cooker.

It never hurts to stay on the safe side. Be careful. Toodles!