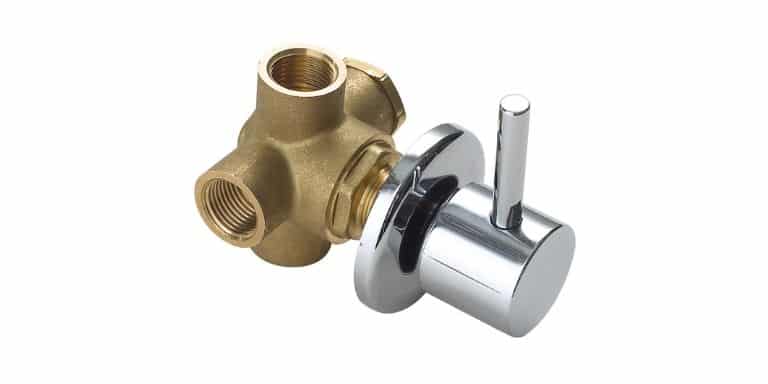 Although it’s pretty rare, sometimes a shower diverter may fall out all of a sudden. When this happens, you have to get it fixed or replaced.

What can you do after your shower diverter fell out?

Well, if you have a front-end diverter spout, you can simply replace a new diverter stem. You can also replace a new spout because they’re super cheap. If it’s a three-valve shower, you have to open up the middle valve. After that, replace the diverter using a socket wrench.

Anyways, this was only a short overview. We tried giving every detail regarding the issue.

Stay with us if you want to have proper knowledge of this!

Why Does A Shower Diverter Fail?

The shower diverter suddenly falling out or popping off means it’s faulty. Usually, it can be a broken diverter gate or a diverter stem.

Sometimes, it can get loose which causes water leakage. You might also face a situation where the diverter isn’t staying on.

In these cases, replacing the diverter is the best option. Replacing spouts or knobs also works.

Issues like shower diverter falling out or shower cable overheating are pretty common. But you can’t just sit around and expect it to get fixed.

So, let’s not waste any more time and head right in-

How to Fix a Fallen Out Shower Diverter?

Generally, installing the diverter stem is the cheapest method. However, you can install a new spout if you want to.

As for three-valve showers, you have to manually replace the diverter yourself.

Replace the Diverter Stem Of a Front-end Spout

A front-end spout has a diverter at its mouth which determines the water flow. These types of spouts are very easy to configure. These are the tools you’ll need for:

Manage these tools as soon as possible and we can get started!

Take the diverter gate and look inside of the spout. You’ll notice that the space inside the spout is divided in a 70-30 ratio.

The gasket will sit in the small portion. So, align it accordingly.

Now, press the stem and push the gate inside using your thumbs. When you hear a click and you’ll realize the gate has gone inside.

With that, your diverter stem installation is complete.

Also, tub spouts are really cheap to get. You can easily replace the spout with a new one.

Replace the Diverter Stem In a Three-valve Shower

A three-valve shower or three-faucet shower lets you decide between hot and cold water. In this system, the middle knob works as a diverter. This procedure is slightly more complex but not impossible at all.

But before that, get these following tools and we can get started:

In a three-valve shower system, the diverter is behind the wall. We’ve to open up the escutcheon first.

An escutcheon is a big plate behind the knob. They are usually held tight with long screws and caulk.

Step-1: Open Up the Middle Knob

First, make sure that you’ve turned off the water supply. Take off the plate from the middle knob afterward.

After removing it, you’ll notice a screw inside which can be a flathead or a Philip. Depending on the screw, get the proper screwdriver and turn it counterclockwise.

Once the screw comes out, pull the knob out.

Since we’ve pulled out the knob, now we’re going to remove the cover. Once again, remove the screws from the plate using the correct screwdriver.

Try to pull the plate towards you now. If it’s too tight and stuck, you can use a faucet handle puller. This way you can easily pull any sort of plate.

Also, some of these plates can be caulked to the wall. To counter this, you’ve to use a putty knife to cut open the caulk.

Step-3: Remove and Reinstall the Diverter

Now, take a look at the diverter and you’ll notice a worn-out gasket. Remove the gasket and get the socket wrench. You can also use a normal wrench.

Anyways, turn the socket counterclockwise and the diverter will come out easily.

Speaking of diverter stems, here are our top picks regarding them:

These are the most common diverter stems. Grab any of them to do the job properly.

It’s time to get the new diverter and install it. But there’s a condition to it. The diverter must match the socket you’re putting it into.

That’s why if it doesn’t match, just take your old diverter to the shop. They’ll work it out and give you a proper diverter.

Anyways, take the diverter and you’ll notice a pressing mechanism at the end. Hold the socket with your fingers and then press the button.

Plug it inside the pipe while maintaining that position. Turn the socket clockwise until you get a thread. Then, use a socket wrench to tighten the socket.

With that, your new diverter is installed. Put everything back to its place and you’re done.

If these seem too time-consuming or a hassle, feel free to hire a plumber. Also, you can make a temporary shower while you renovate.

Question: How much does it cost to replace a shower diverter?
Answer: The diverter stem itself costs around $10-20. If you want to replace a spout or hire a plumber, it’ll cost even more.

Question: How long do shower valves last?
Answer: The showers valve costs around $20-30. But they are usually really sturdy. If the build quality is great, a shower valve can last up to 15-30 years.

You now have a better idea of what to do after your shower diverter fell out. We hope this has cleared your confusion, even if a tiny bit.