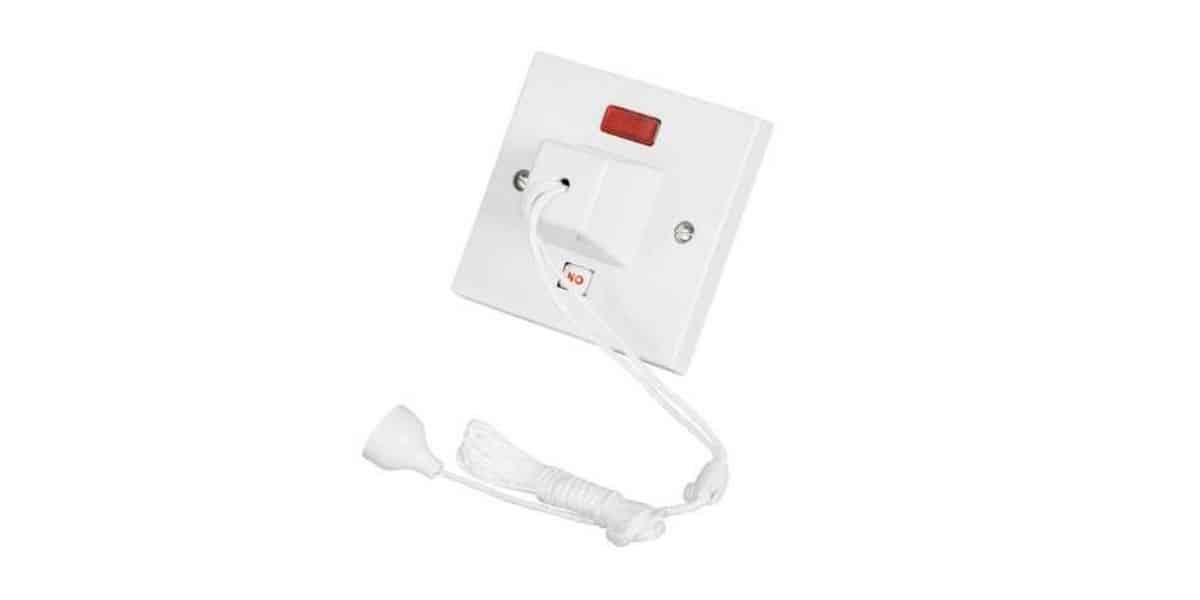 So you’ve come home from a long vacation and can’t wait to shower!

Suddenly, you find your shower pull cord not working! Can anything be more frustrating? We guess not. Well, we’re here to tackle this problem.

Shower pull cords can get damaged due to wear and tear. Also, a burnt connection or a broken shower cord can stop the cord switch from working. So, you’ll need to replace the cord switch. To do so, turn off the power and observe the wiring. Next, remove fittings and connect to a new switch.

Sounds promising? Then let’s jump into the main part.

Why is Your Shower Pull Cord Not Working?

Now, your shower pull cord isn’t working, and you have no idea why. But before we talk about fixing the issue, let’s check out the reasons.

As you already know, a shower pull cord is like an insulator. It cuts off electricity from the shower. Which is a much-needed feature while repairing the shower. Now you may wonder why you can’t simply switch off the power from the circuit board.

Well, you most certainly can. A shower pull cord just makes the job easier for you. Now, that was all the basic information you needed on this issue.

Thus, let us take a glimpse of the key reason behind the shower pull cord not working.

Every material gets damaged over time. When you use a shower pull cord switch over a long time, the wire connections may weaken. As a result, the pull cord will slowly stop working overtime.

You see, the pulling action on the cord is pretty damaging. When you pull a rope, it flips the switch pretty sharply. Over time, this action damages the switch altogether.

Also, try not to tamper with the switch too much. Don’t touch the pull cord, when you shower. Instead, only switch off when you don’t use the shower for a few days.

But keep in mind, a good shower pull cord is supposed to last for 8-10 years. So if you find that your cord keeps malfunctioning, go for a better quality one.

So save yourself some trouble and get a long-lasting one now!

Other than a regular course of wear and tear, a burnt connection might be the cause. But how does a shower pull cord burn anyway?

When you have a loose connection, excessive heat is generated. This flow of electricity can melt your wires and cause serious damage. Also, overheating is also one of the factors behind a faulty shower isolator switch.

The best solution to this problem is to stay alert.

Still, if you notice that your pull switch is hot after use, better diagnose the problem. Early detection can become a boon. Moreover, it can relieve you from the pain of replacing a pull cord.

Another tip is to always fit your wires carefully so that they don’t become loose.

Last but not the least, your shower cord could break every once in a while. This obviously, makes it unusable. So, how to fix this?

Well, first of all, invest in a good quality switch. Next, make sure that your socket isn’t screwed in too tightly. This can cramp the wires inside, causing them to malfunction.

Lastly, use the shower cord with care. Don’t pull on the cord too hard, especially if it’s quite old.

So now we’ve checked off all the key reasons behind a shower cord not working. What’s next? Let’s see how we can fix this problem.

How to Replace a Shower Pull Cord

So for whatever reason, your shower pull cord isn’t working. Do you think this pull cord failure can be fixed? Nope.

A shower pull cord cannot be fixed. Once it’s damaged, you’ll need to replace it altogether. Don’t worry, it’s not a difficult job.

You’ll need some simple tools, and some time on hand.

Coming back, let’s see how to replace the cord.

Step 1: Turn the switch off

First of all, turn off the switch. Otherwise, you may end up electrocuting yourself. Isolate the switch by cutting power, from the circuit board.

Although common sense, forgetting this step can turn out to be fatal.

After removing the switch cover with a screwdriver, take note of the wire placements. If you’re a beginner, learn about wiring basics beforehand.

This will help you set the wires accurately in place. Also, making notes of which wire goes where can help.

Once you’ve noted the wiring placements, time to loosen the screws. To loosen them, you’ll obviously have to bring a screwdriver.

Once you’ve removed the screws, attach each wire with the new switch. Study your notes, if you get stuck.

Once you’ve attached it to the new switch, time to install the cover. Perform this with care, without cramping your wires.

Or else, the shower pull cord may need a replacement soon.

Question: How do you clean a bathroom pull cord?
Answer: A bathroom pull cord can accumulate a lot of dirt over time. But, it can be easily fixed by mixing a cup of bleach with a cup of water. Pour in a plastic bag. Then tie the bag around the cord and let it soak for a day.

Question: How does a pull cord switch work?
Answer: A shower pull switch is connected to a toggle switch. This helps you turn off the switch with one pull, and turn it on with another. It’s best used in a damp environment.

With that, we come to the end of our post. We hope you liked our content and learned something new.

Still, if you find your shower pull cord not working, let us know.  Simply drop your comments and we’ll try our level best to help. Also, if you have a tip that we missed, share your pearls of wisdom.

Until next time, take care!