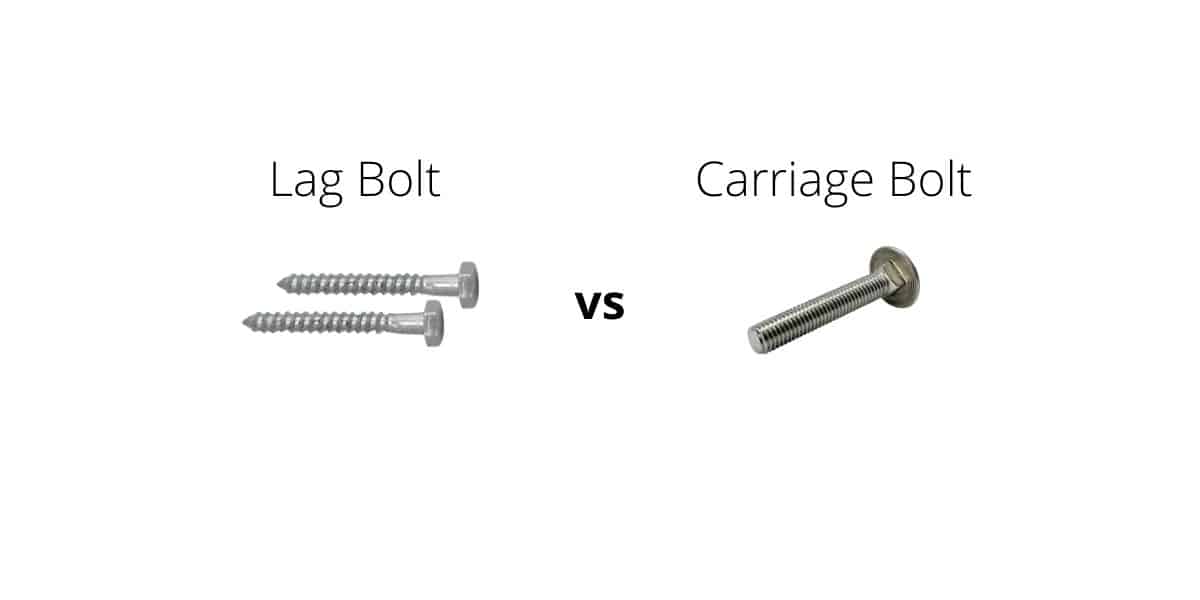 Construction itself can be very hectic. Not knowing which bolt to use will only add to your stress level. Because we don’t want to build the entire structure with a bolt. And then find out that we’ve used the wrong one!

Which bolt should you use between lag bolt vs carriage bolt?

They have a major variation in their shape. Also, the application is quite distinct. Even in construction, they are used in separate types of work. And lastly, we’ve to consider the cost and availability of these.

Interested to know more about these options and the differences? Well, we have an entire article waiting for you!

Without wasting any time, let’s jump straight in!

Although they are both basically used for construction. And these are very much resistant to rust. They have some key differences between them.

To summarise the difference, here a quick review:

Even though these have some clear distinctions. They are sometimes regarded as the same. Just like how you chose wires for your housing. Therefore to clarify the differences, we have discussed the features of each down below.

To better understand the two bolts, we’ve dived deep into all the differences between them. You can now choose which one you need for yourself. First, let’s look at their physical appearance.

Shape Of The Bolts

These bolts are very distinguishing in shape. The shape is one way you can identify which one will best fit your purpose.

In the case of a lag bolt, the threaded portion ends in a point. Moreover, comparatively, this part of the bolt is wider. And they have a hexagonal head and a round neck.

They are also referred to as lag screws. Because they look more like a screw than a bolt.

They are also known as plow bolts. And have their entire threaded portion in the shape of a cylinder. And they end in a flat edge at the bottom.

They have a domed head and a square neck. This shape helps prevent the bolt from turning after it’s tightened.

Ease Of Application Of The Bolts

As mentioned earlier these are both used for construction. But the variation comes in a way they’re used.

As they have a pointed end, they can be directly drilled or twisted on. You don’t have to make a hole separately to insert these! Thus they are comparatively easier to place in.

Their pointed threaded portion helps them to stick. That too without any fastener.

Carriage bolts on the other hand are a common fastener. But, due to their shape, you’ve to drill a hole to put it in. Thus requires a little more work than lag bolts.

Moreover, this set of bolts require washers. Also, they require a nut to fasten to the surface properly. This is, again, because of their shape. However, their shape will help better fasten your surfaces together!

Therefore, you can say the application process is a tiny bit difficult comparatively.

But it’s very important to remember the washer and nut info. This is because, without these, the bolt won’t function properly. Moreover, this also helps you to distinguish between them.

Strength of The Bolts

For any sort of construction, we must ensure all bits and pieces are secured properly. We must consider how strong these bolts really are, especially if you’re installing the best wooden stairs.

Though lag bolts are preferred to attach heavy wood structures. They simply don’t have the strength that other counterparts do.

Mostly because they usually don’t come with an added washer and nut. Thus, they don’t have that added weight capability.

Given that carriage bolts are attached with fasteners, they have an upper hand. This provides extra support to your constructed material. They can also withstand large amounts of weight.

Plus, you can even tighten it accordingly as you wish. Do keep in mind that your wood might shrink over time. Overtightening might be harmful to your structure.

Use in Specific Construction Work

Let’s look at what sort of wood constructions each can be used on. After this part, you’ll be pretty clear on which bolt to use for what.

These are commonly used when your construction needs an added strength.

They’re mostly used for deck constructions and rafter constructions.  This will also apply when you build garages, outbuildings, etc. Thus before building something, it’s necessary to read the instructions!

The rails and frame of dock construction use these bolts. Because of their quality of not piercing through the wood.

A swing set construction also requires the most amount of these bolts.  If you read through the manual, you’ll see that it’s entirely built of carriage bolts.

Carriage bolts are usually used in pergola construction. Such projects require you to join many pieces of wood together. Moreover, for your falling bed slats, you can use carriage bolts too. Just connect the slats to your frame with these bolts.

Well, that’s all from our end!

This was basically the difference between the two bolts.

Question: Are lag bolts stronger than screws?
Answer: Yes! As a matter of fact, structural screws are much stronger than lag bolts. And they make more of a robust connection with the surface. A drill, Phillips head, or hex-head lag can be used to fasten the screws.

Question: Do lag bolts need washers?
Answer: Nope! You don’t need a washer to install your lag bolts. It is rather installed through the pilot hole. This is larger in diameter compared to the threads. A washer is only used to prevent the hex-head from piercing into the wood

Question: Are carriage bolts strong?
Answer:  Yes! They are very strong comparatively. Once installed they can take on massive weights. Let’s consider a grade 5 carriage bolt. They can hold onto 8437 kilograms of force per square meter. Moreover, they are tested to take on 5976 kilograms!

With this, we’ll say our goodbyes! But we hope you now know about lag bolt vs carriage bolt.

There’s a rule of thumb to make it easier for you to remember. A carriage bolt is used for joining. Whereas, lag bolts are used to make the fastening even stronger.

Choose the bolt according to its purpose or what you’re constructing!

Have a great day and good luck with your work!