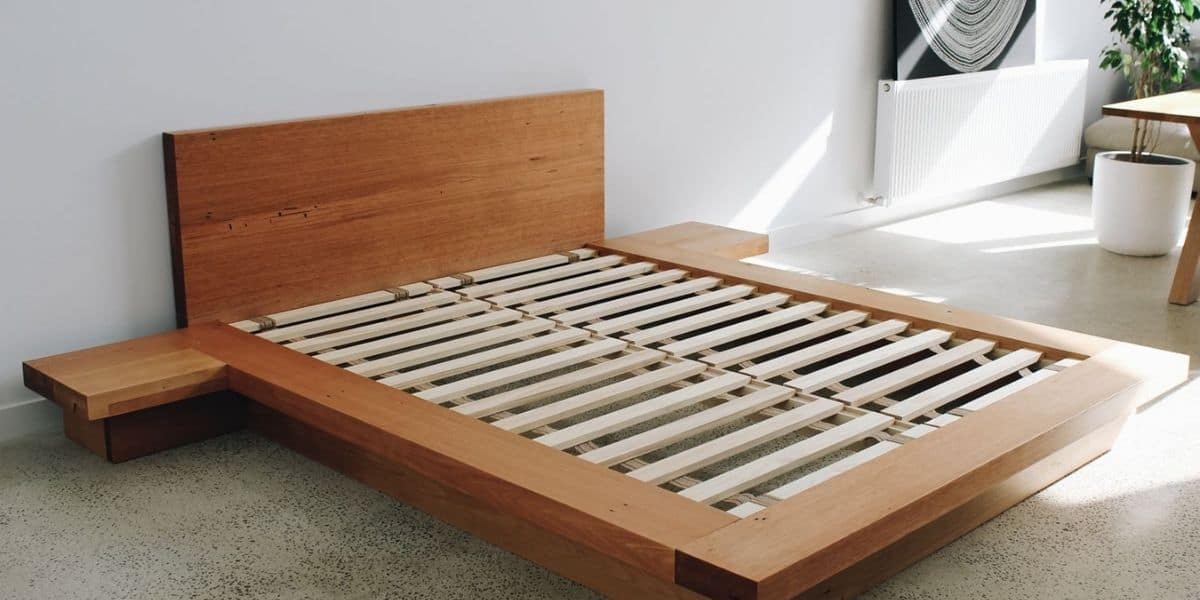 The feeling of having missing bed slats is beyond annoying, right? But guess what! We have easy solutions for this annoying problem to help you relax in your bed after a long day at work.

So, how to keep bed slats from falling out?

First, check if the pins securing your bed slats are in place or not. If they still keep falling out, try using velcro strips to attach the slats with the ledges of your bed. You can also attach the slats together with your own customized plywood for better support!

Don’t worry, we know you’re still confused. That’s why this article will help you keep your bed slats secured at the stroke of a pen!

So, instead of beating around the bush, let’s dive into the details.

Quick Navigation
How to Stop Bed Slats from Falling: 3 Key Solutions
Solution 1 of 3: Checking the Pins of Slats
Solution 2 of 3: Attaching Velcro to Slats
Solution 3 of 3: Making Plywood to Support Slats
How to Cut Plywood Manually
FAQs
Bottom Line

How to Stop Bed Slats from Falling: 3 Key Solutions

Slats falling out isn’t that hard of a task. And we’ve found three ways to solve this. However, each of the methods has their own perks and cons.

Stay tuned to find out our three offered methods to keep your bed slats from collapsing.

Solution 1 of 3: Checking the Pins of Slats

The slats of your bed are supposed to come with some pins attached at the top and bottom of them. In case of any accidents, you might face the misfortune of these pins falling out. If they do, the slats are most likely going to end up with the same fate.So, make sure to check if the pins are still there from time to time to keep your bed slats from falling down.

Solution 2 of 3: Attaching Velcro to Slats

A velcro is a thin strip of adhesive that fixes your bed slats that keep falling. It’s also very interesting to work with as a velcro has multiple uses!  So, just as you’d prepare yourself for painting metal lockers, get started on this too! All you have to do is use the velcro to attach each slat with the ledges upon which it rests.

Your velcro will most likely need another glue for this to work. So in this table, we’re listing the 3 best types of glues for this purpose. For your convenience, the prices of each tube and their setting time are also given!

So, pick your favorite to work on fixing the slats based on your budget and time!

You know what? It’s about time you stop blaming the poor bed slats for keeping falling and give them a friend to help instead! For example, by hanging headboards or by attaching plywood! For this reason, you need to buy some cheap sheets of plywood.

Then, cut the plywood according to the size of each slat. Place them on top of the slats next and attach the two with small screws. You’re done!

A further note: Attaching plywood on top of slats makes mattresses more comfortable to lay on, so don’t be lazy and start cutting!

How to Cut Plywood Manually

Never did this before? Relax. We’ve got you covered. Just grab the following tools and join us in some woodcraft!

First, conduct the basic step of figuring out the size of the plywood you’ll need. Use the marker and ruler to give points on the plywood by placing it on top of the slats.

Remember, you need to match it accurately with the size of your slats. So carry out this stage carefully and double-check the results!

Now, let’s get into the real action!

Take up that hand saw. Hold it firmly and upright before starting out. Now, don’t get scared and start moving your hand! Make a notch at the wood’s edge and then start cutting. Keep note that you will have to keep your saw at 30-45 degrees while cutting.

Don’t have a protractor to measure the angle? Relax! We have a hack that’ll help you out.

Grab two strips of tape and attach them to one another in a way that their corners don’t overlap. After that, fold the attached tapes into half. The side of the folded tape will present you an angle of 45 degrees.

Align the saw and cut along the tape, treating it like a ruler itself. That’s it!

It’s possible that you might face some issues while cutting some parts. How to solve that?

For starters you can try making some twists on the saw.

While reaching towards the end, grab that cut-off end with another hand for extra support.

See? You did it! This will do the trick of stopping the slats from falling.

Question: Should you screw down bed slats?
Answer: Since sometimes slats are often attached to the ends of the bed, the slats should be thick if they’re screwed. Try making the slats around 0.75 inches thick.

Question: Do bed slats break easily?
Answer: If a person adds excess weight on one particular slat, it may also bend just like the case of shepherd’s hook leaning. Eventually, this will lead to breaking down.

Question: Which way do bed slats go?
Answer: When someone lays on the bed, the slats bend downwards. They resume their original position after the person gets up. The upward curved shape of the slats makes them act like a spring.

That’s about it from us. Yes, the methods on how to keep bed slats from falling out are cheap, unlike the cost of moving a garage!

Slats are one of the major components that handle your weight while laying on the bed. Hence, it’s important to know how you can keep them fixed to avoid the discomfort of your mattress sinking downwards.

Melissa Hawkins
Hi, Melissa here, from Illinois, US. I’ve been running a Furnace operator and tender business for quite some years now devoted to comforting the lives of people within their homes.