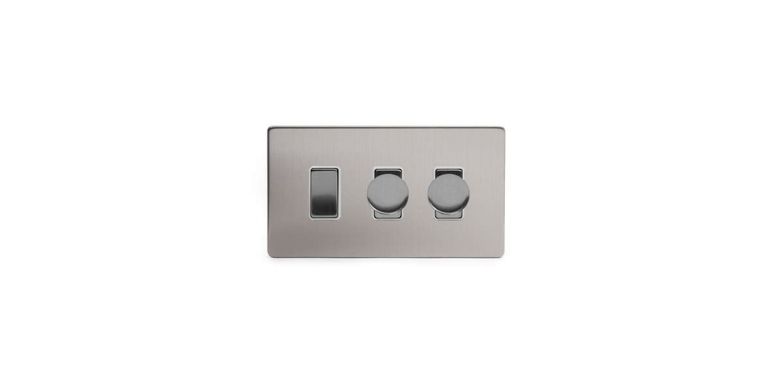 You want to be able to switch your lights on/off from multiple locations. And you also want to control the intensity of the light from different places.

Can you have 2 dimmers on a 3-way switch?

In short, that is the answer.

However, you should keep reading since we will explore the topic in more detail.

Let’s get into it then!

First thing’s first you have to make sure that you’re using 3-way dimmers. If you use an ordinary dimmer switch, the other 3-way switch would lose its functionality.

Now that that’s out of the way, let’s get to the main topic. If you’re using a normal 3-way dimmer, you can have only one dimmer. The switch at the other end must be a 3-way switch.

You would be able to turn the light on/off from either location. However, you’d only be able to control the intensity of the light from one place.

The process is simple. You’ll need a few tools and a little patience.

Make sure to have the following.

Whenever you’re working with electrical connections, ensuring your safety comes first. To do that, go to your fuse box. Locate the circuit breaker that controls power to the circuit you’ll be working on. Now, switch it off.

If you find any of the circuit breakers in the off position, it might’ve been tripped. Lots of appliances can trip a breaker.

Unscrew the faceplate and take the switch out of its housing. Now, use the voltage tester to ensure that there’s no power. Once you’ve done that, safely remove the wires from the switch.

Now, the wiring will be different based on the location of the light fixture.

Switch/Dimmer/Light: If the light is at one end the connection is a bit easier. First, take the incoming cable from the power source. Strip it.

Take the other traveler wire. Run this from the left switch terminal to the remaining traveler terminal on the dimmer. Pigtail the incoming and outgoing neutral wire in the first switch box. Follow suit for the ground wires.

Now put everything back in the switch boxes and screw on the faceplate.

If you’re putting in a light without a fixture, the steps will still be the same. Only the installation of an electrical box beside the light will be added. Much like it is in the case of installing a ceiling fan without fixtures.

Switch/Light/Dimmer: If the light is in the middle it gets only a bit complicated.

You’ll need two 3-wire cables. One will run from the switch to the light. The other from the light to the dimmer.

Follow suit for the incoming ground, neutral and hot wire. Now, take one 3 s. Now take a 3 wire cable and run it from the switch to the light.

Attach the black traveler to the left traveler terminal. And the red one to the other. Pigtail the ground and neutral wires to the corresponding incoming wires.

Now run another 3-wire cable from the light to the dimmer. Attach one end of the neutral wire to the light. And the other to the common terminal on the dimmer.

That’s how you attach a dimmer and a 3-way switch.

Workaround to the Dimming Issue

Say you want to be able to dim the light from either location. What do you do then? Well, there are a few workarounds.

Dimmers on The Common Lines

You can place the dimmers on the common lines. In this setup, you would use two dimmers along with the 2 3-way switches.

You would need to leave the dimmers in the on configuration always. And use the switches to control the on/off function. Once the switches complete the circuit, you’ll be able to use the dimmer.

If you don’t mind spending more, you can get new multi-location dimmer switches. These devices can be paired with a number of other devices. Such as 3-way switches, 3-way dimmer switches, or smart-home systems.

You can get one of these if you are confused about it.

That covers everything about dimmer and 3-way switch setup.

Question: Can I use fan speed regulators as dimmers?

Answer: No. While rotary dimmers and fan speed regulators look the same, they are completely different. Substituting one for the other can result in circuit failure at best. And fires at worst.

Question: Will all dimmers work with all lights?

Question: Can I invert the connection of the red and black traveler wires?

Can you have 2 dimmers on a 3-way switch? The short answer is no. The long answer is that there are ways to achieve the desired functionality.

The process might be a bit complicated. But, you’ll be able to gain the ability to dim the lights from either location. Or you can shell out some extra cash. And get the multi-location dimmer switches.

That’s all from us. We’ll see you again with another solution to another problem that troubles your house.